Just when you think that you have seen and heard so many stories from the Holocaust, along comes another story that shocks you because it is so unique and relatively unknown.  A new documentary film, The Albanian Code, directed by Yael Katzir, tells the story of how one country in Europe, a small country that was occupied by the Nazis, was able to save thousands of Jews.  In fact, Albania, which is mostly a Muslim country, had no Jews persecuted or deported or murdered during the period of the war. 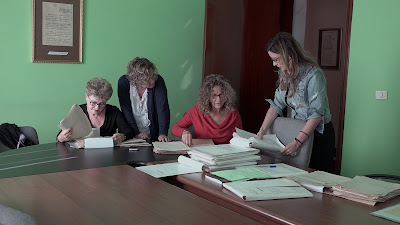 Annie is an Israeli woman, mother of two, born in Macedonia. At the beginning of the war when she was a small child, her family fled to Albania where they were saved.  Annie decides to travel back to Albania with her daughter, in order to express her thanks to the Albanian people.  Veteran filmmaker, Yael Katzir, accompanies Annie on her journey, documenting her emotional visits with the descendants of the people who helped to save her family.  In addition, she goes to the National Archive in the capital city of Tirana, speaks at a school, meets with numerous people who risked their lives to save Jews, and even has an audience with royalty!

During World War II, Albania was first occupied by fascist Italy, which did not round-up Jews and send them to concentration camps.  During this period, the prime minister gave orders that the Jews amassing on the border, looking for refuge, be permitted to enter the country.  In 1943, after Italy surrendered to Germany, the Nazis ordered the Albanian government to provide them with a list of their Jewish population, but the Minister of the Interior refused.  If this wasn’t enough, the Albanians also saved 20,000 Italian soldiers from terrible treatment at the hands of the Nazis.  These same soldiers had been their occupiers just days before.

Albania is obviously a very special country, with a tradition of human compassion.  The title of the film refers to a moral code which directs the people to save others from danger and persecution.

The Albanian Code (documentary, 53 minutes) tells an important story that needs to be remembered.  The film is available from the filmmaker herself: katziry@gmail.com.

You can watch the trailer here.  Code: Yael 20.