In the last few years, there has been an intensified effort by the ultra-Orthodox community in Israel to separate between men and women in the public sphere.   I would like to cite a few examples -- teenage girls were covered up at the dance performance marking the inauguration of the new bridge that looks like a harp at the entrance to Jerusalem; women are now sitting at the back of the bus on bus routes that service ultra-orthodox neighborhoods; orthodox male soldiers have been boycotting army entertainment that includes women singing; and during holiday seasons the crowded streets of Meah Shearim have been divided between women's and men's sides of the streets.  These intensified efforts by the ultra-orthodox to degrade the position of women and to challenge the status quo within Israeli society have gotten a lot of press and have angered a lot of people, including me.
As if all of this is not enough, there is now another phenomenon -- films made by and for women only! At first this really pissed me off and I didn't want to see the films or go to the events -- one of which was recently held at the Jerusalem Cinematheque.

But, in an effort to understand better, I took a look at the documentary, The Dreamers (also called Celluloid Dreamers) by Efrat Shalom Danon (58 minutes), which offers an in-depth look at the women behind some of these films.   I was surprised by their dedication to the world of cinema.  Similar to women who enter the field of regular filmaking, these ultra-orthodox female scriptwriters are interested in having their voices and dreams portrayed on screen and the actresses love the adrenaline rush of appearing before the camera.  Sounds familiar, doesn't it?

This film can open our eyes to the world of ultra-orthodox women and how they are coping with their lives in a closed and patriarchal society.  The  film is available from Go2Films. 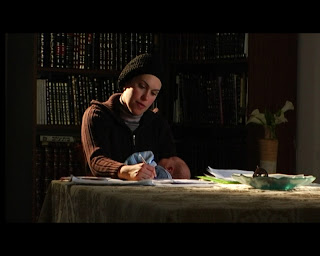