If you do film programming, you know that documentaries about musicians and artists can be very attractive to your audience.  State-Less, directed by Sharon Hoter-Ishay, is a new and award-winning art-film about an artist-musician named Adi Khavous.  The film is currently playing at Cinematheques around Israel.

Adi Khavous has been living in Montreal for years.  He sings and plays with a talented hard rock group – the SpoonLickers -- but admits that it barely pays to support him.  When he comes home to Israel for a visit, he stays with friends, since his father is living in France and his mother lives in a spiritual center. 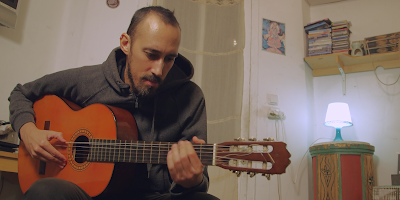 Adi is a compelling and unique human being, with a tendency towards personal introspection and a mischievous upcurl in his hair.  He is quite off-beat, living a life of unease and loneliness, searching for meaning and belonging.  He says he doesn’t feel comfortable abroad, and he doesn’t feel comfortable back in Israel.  He does wall art – a sophisticated and meaningful form of art for public consumption, much more provocative than graffiti – and large-scale installations.  And he dreams of becoming a success in the music world – and at the end of the film, he does find a new kind of success, but not the one he has envisioned!

State-Less offers a special look at a special figure -- a documentary (48 minutes) available directly from the filmmaker – state.less.is.wow@gmail.com or check out the website.