Here in Israel, the subject of so-called “honor” killings has been in the news a lot lately.  It seems that a surprisingly large number of Palestinian women have been murdered and all-too-often their murderers have not been apprehended.  Just this week, the headlines have been filled with the story of a 19-year-old woman who was murdered by her uncle in the northern Negev.  Both the Israeli and Palestinian Authority police have been trying to deal with this phenomenon but have not had much success.  In fact, the numbers of young women falling prey to this type of tragic end has risen in recent years.

With her new film, Women of Freedom, Abeer Zeibak Haddad (who previously made Doma, about sexual abuse within the Palestinian community, which was reviewed on this blog in 2012) has created a hard-hitting documentary look at some of the issues and emotional personal stories of these honor killings. 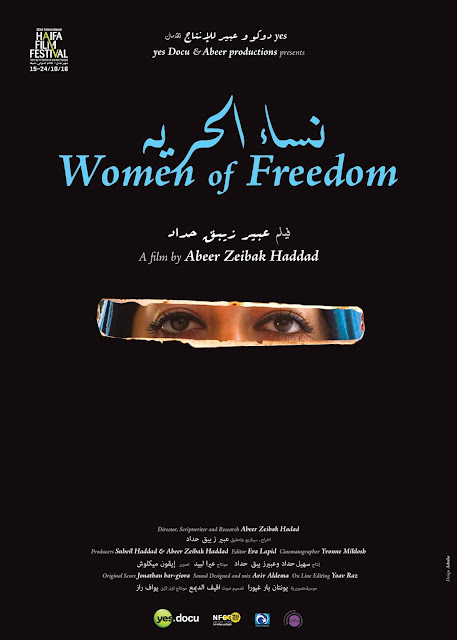 The film opens with a letter from a prisoner, a man who murdered his sister 17 years ago when he was 20 years-old.  Now, he realizes that he murdered her not for what she did or didn’t do but out of his own “despair, weakness and ignorance.”

This film is filled with heart-breaking stories of young women and their families. The women are attacked for diverse reasons -- for wanting to break off with an abusive fiancé, for contemplating marriage with a non-Muslim, or for allegedly having sexual relations out of wedlock.  Members of the family feel that they must deal with these transgressions – no matter how insignificant – with their own hands.

We meet the parents of Alaa, from Haifa, who studied to be a dentist.  They are compulsively caring for her gravesite. In another family, Rim went to the police to report that she felt threatened by her four brothers.  The police sent her home and she was murdered a few hours later.

We also meet some women who have survived attacks by members of their families.  Halaa was attacked by her own knife-wielding father, but her aunt succeeded in stopping him. She explains that if you do something that seemingly only affects your own life, all of your extended family looks at it as something that also affects them. In fact, it reflects on them.  “If I make a mistake, everyone will get hurt.” In another example, Amal was purposefully hit by a car.  She was battered and bleeding but she survived.  She asks, why doesn’t our society defend its women?  She says her brother has destroyed her life and her dreams and she refers to herself as an “unburied corpse.”
This is a particularly artistic and human film, but Haddad has decided to also include statistics:  58% of Palestinians think that if a woman is murdered, it’s her own fault; 55% support the “honor” killings; 51% believe that the killers should not be brought to justice.  Haddad herself is haunted by a gruesome story from 40 years ago of a young woman whose grandmother crept into her bedroom at night and poured mercury into her ear.   She died shortly thereafter.

In my opinion, the name “honor killings” is a misnomer for two reasons.  First of all, how can it ever be a matter of honor to murder a young woman?  Secondly, it is important to note that not all of these women have been killed for allegedly bringing shame to their families.  Some of them were killed for other reasons, but the Israeli Arab community is suspicious that the Israeli police has been classifying the murders as honor killings as an easy way for them to ignore murders within the Arab community.

An extraordinary film, Women of Freedom (documentary, 57 minutes) provides a sensitive and substantive look at a terrible phenomenon that is continuing, without any seeming end in sight. The film is available from Journey Productions at www.journeyman.tv or contact the filmmaker Abeer Zeibak Haddad at suheilh@zahav.net.il.