Grassroots Movement for Peace and Reconciliation

The film, The Field by Mordechai Vardi, is mostly about Ali Abu Awaad, a Palestinian, living in Beit Ummar near Gush Etzion junction, on the road that links Jerusalem to Hebron.  Abu Awaad believes in non-violence and learning to know the other and he is one of the founders of “Shorashim (Roots)”, a joint project of Palestinians and settlers in the Gush Etzion region.

When he was a child, Abu Awaad’s mother was jailed for five years as a Palestinian activist.  He also sat in prison during the first intifada and lost a brother in the violence. 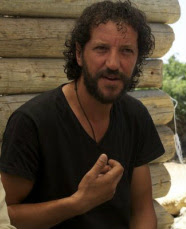 This film is mostly about him and about the discussions that take place at the family’s field.  Located in the West Bank, within the heart of the conflict, there are also many Jewish activists who we meet in the film – Rabbi Avia HaCohen, Rebettzin Hadassah Froman (widow of the famous Rabbi Menachem Froman), Shaul Judelman, Rabbi Hanan Schlesinger and some others, mostly from the Jewish settlements in the Gush Etzion bloc.

Abu Awaad has permitted Israelis to erect a memorial on his land to the three boys who were kidnapped and murdered near there a few years ago and we watch as some of the parents of the boys come to meet Abu Awaad at this new memorial site. This is one of the most moving sections of the film.

He is particularly eloquent and he tells the Jews who come to hear him: “you want to stand in the shoes of the other, not to lose your identity but in order to engage him”.  His brother Khaled is also active and he talks about the despair among the Palestinian youth.  One of his sons is in jail and the other was hurt in a clash with Israeli soldiers and is now handicapped.

The Abu Awaad brothers do not believe in going back in history and arguing over whose narrative is the right narrative.  Instead, they say we have to see each other as human beings and move on from there.

But do they have any followers? We don't know this from the film, but it seems that they are practically alone –and not terribly accepted—in Palestinian society.

And do the Jewish settlers—who are pioneers in this new movement of dialogue and reconciliation—have any traction in their communities?

Moreover, it is not entirely clear what the real purpose of this organization is. Is it to meet and learn to recognize the pain and suffering of the other?  This is a good first step, but is it enough?

Or, can we look forward to larger scale activities in the future?  Can these small numbers of Jewish settlers and Palestinian non-violent reconcilers actually have any impact in their communities, which are largely resistant to their activities? This would certainly be an important and welcome development, if they can pull it off.

The Field (documentary, 82 minutes) premiered at DOCAVIV a few days ago.  It is available from JMTFilms.
Posted by Amy Kronish at Sunday, May 21, 2017