In recent years there have been many biographical films about figures from the world of Israeli culture and music (for some examples, see the series Culture Heroes).  A new and stunning documentary film, Bird in the Room, directed by Ari Davidovich, would fit perfectly into a program on Israeli culture and cultural icons.

This film presents the life story of the Hebrew poet, Tirza Atar (1941-1977) -- her writings, the crises of her life and the stranglehold that her relationship with her father had on her life. 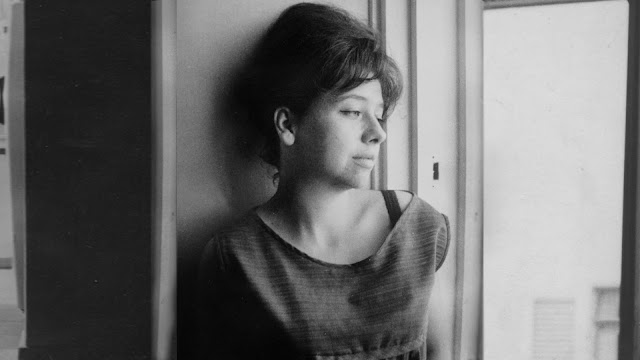 Tirza's father was Nathan Alterman, a cultural icon in Israel of the 1950s.  Alterman is known for many popular and successful poems and songs (for example, he wrote "Shir HaEmek" about Emek Yizrael that was written for the early Zionist film, Land of Promise), but he also wrote about death, about being prepared to die -- this was his dark side and this heavily influenced the young Tirza.  In addition, she was only 6-years-old when the Altalena was blown up in the Tel Aviv harbor but it affected her and her writings immensely.

As a young actress, she fell in love and married Oded Kotler, also a young actor at that time.  It was the early 1960s and they went together to New York to study theater, but it was very hard for her to be cut-off from home and she returned home in a terrible state.  Eventually she was able to rebuild her life and she returned to acting, married again, had two children, and became a prolific writer of children's books, poetry, and lyrics for popular songs.

This is the story of an artist, a well-known cultural figure, and it makes use of wonderful re-enactments, recollections, songs, poetry, photos from family albums and provides a striking English translation of the poetry.

The film Bird in the Room (documentary, 66 minutes) is available from Maya Weinberg -- mayafilmfest@gmail.com and from Docs for Education.
Posted by Amy Kronish at Sunday, June 05, 2016