A Story of Heroism during the Shoah


During the last 20 years, we have seen many films of Holocaust survivors taking their families to learn about their roots in Europe, reminiscing and talking about their growing up and telling stories of their survival.  This one is especially compelling and historically fascinating, produced with graphics and tremendous research, telling a personal story that is different from other stories.  This is a tale of two sisters who were deported to Auschwitz very late in the war -- and lived to tell the tale.

A Story in the Third Person, directed by Yarden Karmin, relates the story of a Slovakian woman named Zuzi, now 86-years-old, who returns to the town where she grew up, together with her Israeli family.  She talks of the importance of "memories" and tells the story of how, together with her older sister, Agi, she survived the dark years of the Holocaust.

They lived in a town called Kosice which was annexed by Hungary in 1938.  The family name was Weisz -- father, mother, and two daughters named Agi and Zuzi.  They had an idyllic childhood and there are beautiful family photos, especially a striking one of the two teenage sisters in 1943, on the eve of the destruction of Hungarian Jewry. 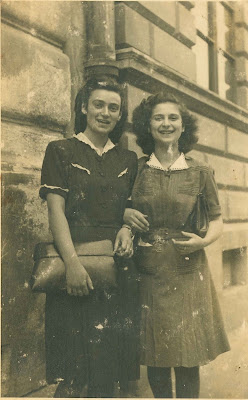 The Jews of the town were first placed in a ghetto and later deported to Birkenau.  From Birkenau, Zuzi, together with her mother and her sister, was transported north to Estonia and then sent on a death march to Latvia.  Their mother was murdered by the Nazis during this march.  Zuzi was only 17-years-old at the time, but she was capable of so much bravery in order to save her sister who was sick with typhus near the end of the war.  After 19 months of terrible suffering and agony, there is the closing of the circle and they finally return home to their family's apartment in Kosice.

This is a family story of wonderful memories, a tale of tremendous bravery, a story told by a woman looking back on her life.  Surrounded by her family, Zuzi relates the details of her story in a matter-of-fact way which I found strangely compelling.  She  explains that she tells the story with objective distance, "in the third person", as if it were the story of someone else.  This is her coping mechanism.

The film, in Hebrew and Slovak with English subtitles, was produced by Elishava Braun-Lapidot, Zuzi's adult daughter.  A Story in the Third Person (documentary, 74 minutes), is available from Ruth Diskin films.