Amir Har-Gil's newest award-winning documentary film, Uri in the Sky, tells the thrilling story of Uri Gil, who served as a combat pilot for more than 40 years till the age of 60.  Produced with the consent of the Israel Air Force, this film provides a fascinating and intimate look at a modest man who doesn't brag about how many MIGs he has downed in his career.  Rather, he talks about the need for level-headedness in times of pressure and how he thrives in these situations. 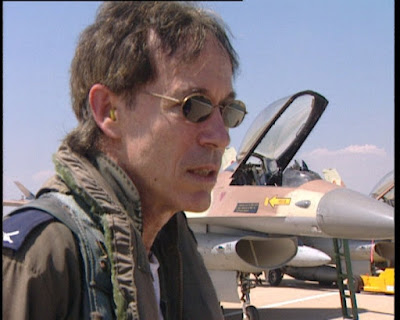 Uri has just recently retired from his career in the airforce with the rank of Brigadier General (reserves) and he will now work full-time as a painter and a grandfather.  At his retirement ceremony, he asked What have I done with my life?  And his response to his own question was very hard-hitting --  "I belong to that small group that has created the airforce ethos to which the enemy has yet to find the response."

He talks about how pilots who have refused to bomb cities makes society stronger, and how he has worried about bombing innocent civilians as a result of human error.  But, he himself is against insubordination and feels that acting upon orders that you receive is a moral responsibility.  His strong sense of morality, however, permits him to be critical of certain government policies and he is not afraid to voice those criticisms.

Uri says that a pilot must be ready for anything, capable of thinking fast in moments of stress.  For Uri, our most important weapon is our flexibility and motivation.

Uri in the Sky is available from Amir Har-Gil --  amirhar-gil@yakum.co.il