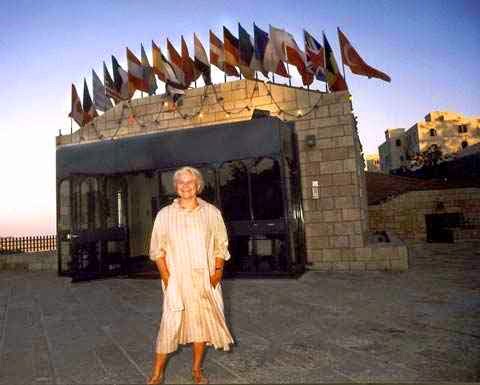 Lia van Leer was a unique individual who succeeded in establishing new institutions, inspired by her own vision and passion. In a country where film had been primarily seen as a form of entertainment or a means of propaganda, van Leer, through her untiring efforts, has helped change that image and raise filmmaking and film appreciation to a new level. As a result, film is now seen as an expression of culture and art, and is funded as such by government agencies.

She passed away last night at the age of 90. May she rest in peace.

I worked for Lia for 15 years.  During that time, I learned a tremendous amount from a greater-than-life woman who was obsessed and committed to her work.  She especially expressed interest and encouragement in two big projects which I curated -- the Yiddish Film Festival (in cooperation with the National Center for Jewish Film in Waltham, Massachusetts) and the establishment of the annual Jewish Film Festival.  She always saw Jewish and Yiddish film as a commemoration to her parents who she lost in the Shoah.

Please see the biography that I wrote about her for the Jewish Women's Archive on-line.