Between Tradition and Modernity 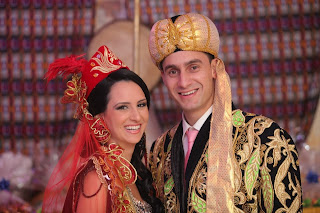 Handa Handa 4, directed by David Ofek and Neta Shoshani, is a documentary film that tells the story of Ronen and Orit, two Israelis from the traditional Bukharan Jewish community.  Their parents came from the central Asian republics of Uzbekistan and Tajikistan after the disintegration of the Soviet Union.  The community, although not religious, is strictly traditional in many ways.

Ronen and Orit have been dating for three years.  They are a beautiful young couple but things are complicated.  In order to protect Orit's honor, her parents are demanding that they get married right away  But Ronen is not in a hurry -- before he takes on the obligations and responsibilities of marriage, he wants to finish his acting studies.  But there is a lot of pressure weighing on him!

Ronen and his brother are stars in the Bukharan community -- performing in a musical comedy troupe called Handa Handa, both in New York and in Israel.  Their shtick is really quite funny and people love hearing it in their own language.

This film portrays real issues in the lives of two beautiful young Israelis, committed to each other and  to their dreams, and at the same time to their traditions.  At a time when many people criticize secular Israelis for not having real values, it is heart-warming to meet this young couple, who are trapped somewhere between the modern lives that they want to lead and the strict traditional lives demanded by their community.   Handa Handa 4 (59 minutes) is available from Go2Films.
Posted by Amy Kronish at Tuesday, August 13, 2013