A Portrait of the Working Class


Super Women is a documentary film, directed by Yael Kipper and Ronen Zaretzky, about hard-working cashiers in a local supermarket.  It's difficult work and there is a lot of pressure on them.  They have to smile at the customers, make eye contact, push the products that are on special, and keep the lines moving.  All of this, for barely a living wage.
Yulia is a 30-year-old single mom, a recent Russian immigrant, who is having terrible trouble making ends meet, having trouble "finishing the month" as the saying goes in Israel.  Even though she is a non-Jewish Israeli, her son is having a brit, but she has no money to give him a bar mitzvah.  Her friend Maya was a professional woman in Russia, but now she is 60-years-old, burdened with a mortgage and loans, and works as a cashier.  A woman who cares about how she looks, taking care with her make-up and her hair, Maya is bitter about her decline in status in the workplace.  But at least she and her husband are getting by.  Nella, the head cashier, is obviously slightly better paid and she tries to help Yulia with money.  But Yulia has her pride and only lets Nella help her by assigning her more hours in the work schedule. 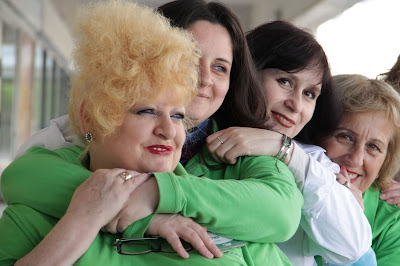 In follow-up to the social protests of a few years ago, this film provides a glimpse at the working class. A beautifully photographed portrait, we are given an up-close and personal look at a group of women, most of them Russian immigrants, who represent a class of society which is underpaid, overworked and barely appreciated.

The film won two awards at DOCAVIV 2013 --
Doc Aviv 2013/Special Jury MentionJury Statement: "The Special Jury Mention goes to a film that opens our eyes to a world we visit every day without seeing, bringing characters to life with respect and generosity."
Doc Aviv 2013/Best Cinematography Award (Avigail Sperber)
Jury Statement: "For sensitively capturing the drama of its characters' inner worlds."

A SUPER movie review!
Here is a link for a 6-minute trailer from the film, for those who wish to have a glimpse before they watch the film on the big screen:
< a > http://www.youtube.com/watch?v=2kO44DLpR2o
Thank you. Michael Treves
(http://www.jmtfilms.com/201353/Society-Ethnology#superwomen