A Study of a Woman in Crisis


During the last 10-15 years of Israeli filmmaking, there has been a shift in the way that women are portrayed on the screen. Not only are there more complex narrative films about women than ever before, but these films also go beyond stereotypes and portray honest and authentic relationships and issues, tackling contemporary subject matter in ways that are compelling to the film-going public.  Previously, in Israeli film, women had most often been portrayed as peripheral characters.  Now, however, women are often seen as major players in important feature films, many of which have received critical acclaim and won prizes at festivals around the world.
The best of these films have been previously reviewed on this blog --

Just recently, I had the opportunity to view a new feature film which is a psychological study of the Israeli mother.  Present Continuous החיים בינתיים   , directed by Aner Preminger and script by Orit Kimel, is about the difficulties of letting your children grow up and become independent, especially when you are living in a constant state of anxiety and siege.  Aner Preminger is well-known for his previous study of an Israeli woman, Blind Man's Bluff (1993) (also previously reviewed on this blog).  The lead from that film, Hagit Dasberg, also plays the lead in this new film. 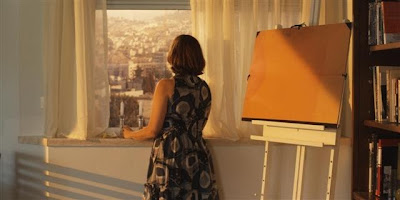 Present Continuous takes place in Jerusalem.  It is 2002, during the height of the Second Intifada (Palestinian uprising) and there are bombs going off almost every day on buses, at cafes and in the outdoor market, and people are frightened to let their children walk in the streets.
Ruthy personally experiences a bombing incident in which she feels the blast and sees the terrible destruction.  In her post-traumatic state, she becomes obsessed with trying to protect her family from the dangers lurking outdoors.  It is hard for her to let her family out of the house.  But it is also not easy to be together as a family within this pressure cooker -- there are tensions, suspicions, betrayals and each member of the family is concerned with his own worries.  But the mother is desperate about keeping them safe and together.

She also talks about her need to do something, to change things, to make a difference.  Her daughter retorts that there are other ways to bring about change, and she lists some of the organizations against the occupation in which the mothers of her friends are active -- Machsom Watch, Women in Black.  But this mother has other ideas about how to keep her family safe.

By barricading her children in a small and claustrophobic Jerusalem apartment -- according to the filmmaker, Aner Preminger -- the mother is metaphorically trying to pull them back into the womb.  The womb can offer safety and warmth for a developing fetus, but it can be stifling and dangerous for a mature adult.

This is a delicate study of a woman in crisis.  It is also an intense and beautiful look at her relationship with her husband and her teenage children.

Present Continuous (2012) is available from Seventh Art Releasing in North America and from Go2Films  in the rest of the world.  View the trailer.