Resistance to the Separation Barrier 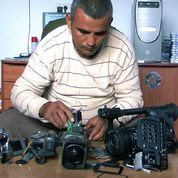 Five Broken Cameras, directed by Emad Burnat and Guy Davidi, a documentary (90 minutes) which premiered this week at the Jerusalem Film festival, is about the Palestinian resistance movement against the placement of the concrete separation barrier which, in many places, was a land grab by Israel.
Emad Burnat is a self-taught cameraman from the Palestinian village of Bil'in (near Modi'in Ilit).  In the year 2005, when he got his first camera, the citizens of Bil'in were beginning a resistance movement (based on the resistance movement begun in Budrus  -- see the review of the film Budrus on this blog), in order to have the separation barrier moved so that their cultivated lands and olive groves would not be cut off from the village. At the same time that the resistance movement begins, a fourth son named Gibreel is born to Burnat.  This film combines the personal and the political/national, documenting Gibreel's growth and development during the first five years of his life with that of the protest movement.

The film is beautifully photographed and also narrated in a thoughtful and personal style.  Burnat is responsible for both -- he is the main cameraman and the voice-over narrator.  He talks about his two best friends -- Adeeb and Phil -- who are leaders of the protest movement.  He says Phil is optimistic and thick-skinned, like an elephant (his name in Arabic).  In one touching scene, Phil sends  little Gibreel to bring an olive branch to one of the Israeli soldiers.

Burnat's cameras are destroyed one after the other.  But Bil'in becomes a symbol and people come from all over the world to support the resistance.   In order to protest the new trailers of the settlers, the Bil'in protesters put down a trailer on their land.  When the settlers use a law that says once concrete structures are built, they cannot be removed, the protesters in Bil'in also decide to make use of this law and they create an "outpost".  The settlers retaliate at night by burning olive trees.   Burnat calls it an "endless cycle".

The demonstrations in Bil'in continue week after week.  As the demonstrators are pushed back, the rock-throwing begins and the soldiers retaliate with guns and teargas.  Burnat says, "Clinging to non-violence ideals isn't easy when death is all around."   There is a clear escalation when the soldiers change course and come into the village, even at night, and there are more clashes.  Burnat is arrested for throwing stones (which we know is unfounded because he is continuously filming at the demonstrations) and then he's released and put under house arrest.  "I know they might knock on my door at any moment, but I'll keep filming.  It helps me to confront life," says Burnat.

I don't want to give away the end of the film -- but those who follow the news already know -- as a result of a court decision and five years of protest, the barrier is dismantled and moved further away.  Burnat says that even though some of the lands are returned to their owners, "the land will always bear the scars."