Sari Kronish, my daughter, is an architect and works for Bimkom, an Israeli NGO that uses professional tools to promote equality and social justice in planning, development and allocation of land resources.  Much of Sari's work experience has been related to the issues of unrecognized Bedouin villages of the northern Negev.  Here is a guest posting from Sari -- 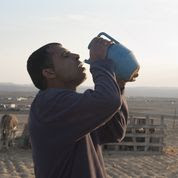 Sharqiya (Arabic for Eastern) is a beautifully shot, full length, feature film, directed by Ami Livne,  that premiered at the Jerusalem Film Festival this past week. The film offers the viewer a powerful window into Eastern culture, especially to the interchangeable concepts of home and land.

Two brothers - one married, the other single - are living in a nameless Bedouin village in the Negev, seemingly in the middle of nowhere. Although life seems meager, they have no choice but to work hard to make it better. Living elsewhere is not an option for the land has belonged to their family for generations.

The two brothers have different approaches to survival. And there is much tension between them because of this. One of them has served in the Israeli army, the other blames the soldier brother for not being around during the hard months after a car accident took their parents' lives. After being released from the IDF, Kamel gets a job as a security guard at the central bus station in Bir Saba (Be'er Sheva). He makes additional money on the side by fixing old electric items and reselling them. Kamel's brother, on the other hand, works only in the village. His wife, Nadia, hopes for a better future and wants to study. This is a point of contention between her and her husband. Only Kamel understands her.

It quickly becomes clear that their homes have received demolition orders. Once again, each brother deals with this situation differently. And Nadia is left to worry. Kamel decides to take matters into his own hands.

By creating a film that is not relentless or hard to watch, the director instigates compassion, leaving the viewer to ask questions. The well-written, reserved yet complex story will undoubtedly leave you wondering if reality can be this bad. But the truth is, unfortunately - it is much worse.
Sharqiya is available from EZ Films.
Posted by Amy Kronish at Saturday, July 14, 2012