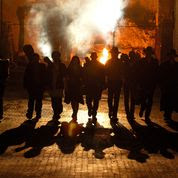 The Ballad of the Weeping Spring, directed by Benny Torati, which premiered this week at the Jerusalem Film Festival,  is a beautiful drama about Mizrahi music.  Mizrahi music in this film refers to the musical style that combines elements of the Mediterranean musical tradition with that of Middle Eastern/North African countries.
The storyline, which is less important than the music, is about putting together the old band  --a nod to The Blues Brothers -- and a metaphor for taking Mizrahi music out of retirement and placing it back into the Israeli mainstream, where it has become very popular in the last 15 years.

Yosef Tawila (played by Uri Gavrieli), the lead musician from the renowned "Turquoise Ensemble", went into retirement after a terrible car accident in which two of his closest musician friends were killed and his lover, their lead singer, was paralyzed.  Tawila decides to go on the road, gathering together talented musicians, in a series of very odd vignettes, in order to offer one last concert for his dying friend, the only other remaining musician from the ensemble.

This is a film of lots of nostalgia, wonderfully diverse and quirky characters, superb music, and  remarkable venues - stone alleyways, rocky hillsides, small pubs.  The film is very stylized and very quirky.  But, most of all, it is filled with fabulous music -- an ode to the awakened interest in Mizrahi music.  In addition to the oud, the musicians play a variety of instruments -- for which I don't even know the names!   There is a discussion about the contemporary tension between these old instruments and the synthesizer which can manufacture all of the sounds without any of the peculiarities of the various instruments.

In addition to offering a nod to The Blues Brothers,  the line-up of musicians lends a touch of Fellini and the plot element in which the superb vocalist sings to help out her father is reminiscent of Zev Revach's A Bit of Luck.

Benny Torati's previous film, Desperado Square (2000) -- which I loved -- was also a salute to an old art form -- emotional and romantic films.  It mixes the nostalgia of the Italian film Cinema Paradiso with a tribute to the Israeli bourekas films, which were ethnic melodramas and comedies.  Also filled with quirky characters and nostalgia and heavily laden with romance, the story takes place in the Hatikvah Quarter on the outskirts of south Tel Aviv, where people live in ramshackle structures.  Film director Benny Torati characterized this film as a nostalgic return to the days of naivete, overpowering love, and big-screen neighborhood movie houses, before television, video, multiplex cinemas and ratings took over our lives.
Posted by Amy Kronish at Wednesday, July 11, 2012