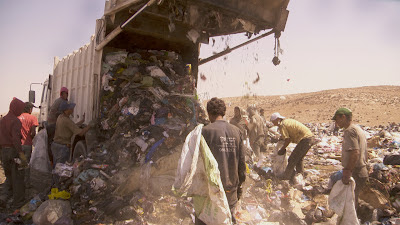 Good Garbage,  directed and produced by Ada Ushpiz and Shosh Shlam, which premiered this week at the Jerusalem Film Festival, is a documentary about men picking through garbage in order to support their families. The Arabic title of the film, Useful Garbage, better describes how these men, and some boys, utilize the garbage dumped near their village to eke out a living.

In stark contrast to the relentless amounts of garbage -- the film is stunningly photographed, including beautiful scenery of the area of the south Hebron Hills, where the film takes place. When they turn the camera around, you see a garbage dump, with burning tires, garbage trucks, and heaps of garbage. This is the outskirts of the township of Yatta.

Although not a political film per se, the film has political overtones.  This garbage dump is not an official or organized site but it is used by the Jewish settlements in the area, including Kiryat Arba.  Certainly an interesting political and moral statement -- dumping garbage on your neighbors.   In addition, the people in the film live in fear of the Israeli soldiers who come and chase them away from rummaging through the garbage.   Yet, the constant dumping from the Israeli local settlements continues.
Not only is hunting for scrap metal filthy work,  but it is tiresome and competitive and there is violence and antagonism between the men.  But the film is about more than just rummaging through garbage.  It  focuses on a number of families and we get to know the people and their personal stories.

Yusuf is educated (but unemployed) and he has made a sub-specialty out of the garbage -- he brings home bags and bags of old shoes and repairs them and sells them.  His wife is from Jordan and for the last 10 years has been unable to visit her family because she didn't have papers which permitted her to live in the West Bank.  When she finally gets these papers (presumably from the Israeli Authorities), they go to visit her family and there is a tremendously emotional reunion with her mother and father.

Badawi is an aging grandfather who comes to work by mule in the dump. Although his wife thinks he is too old to be still doing this work, he has no choice since his grown son is imprisoned by the Palestinian Authority for attempting to sell land (that does not belong to him) to the Jews.  The old man says that the only thing worse than the humiliation of working in a garbage dump is the shame that his son has brought on them.

Harun is an adolescent boy who has dropped out of school with his mother's approval so that he can work in the dump, and 17-year-old Ibrahim is ambivalent about returning to school to complete his matriculation exams.  These two youngsters know no other reality and are another type of victim of the Israeli occupation. Not surprisingly, the people in the film talk openly about how they equally hate the Israelis and the Palestinian authority.

An additional sociological element -- these poor families invest a fair amount of their resources into building spacious homes with beautifully tiled kitchens and flooring.  Perhaps this adds to their status, since they openly talk about the shame and humiliation of what they do to earn a living, or perhaps it is a way for them to tie themselves to their land and their villages, in the face of the injustices of Israeli land confiscation.

Yusuf, Badawi, Harun and Ibrahim were all at the premiere screening with their families!
This is a difficult and relentless film (91 minutes -- a shorter version is also available), an authentic document, and quite hard-hitting -- but certainly well worth the effort.  The film is available from Go2Films.
Posted by Amy Kronish at Tuesday, July 10, 2012