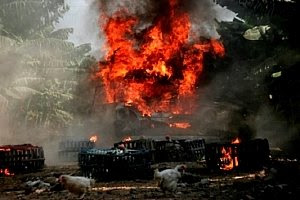 During the last few years, we have seen major award-winning films about the war in Lebanon – Beaufort (Joseph Cedar), Waltz with Bashir (Ori Folman), and the earlier films, Cup Final (Eran Riklis) and Time of the Cherries (Haim Bouzaglo).

This year's Jerusalem Film Festival premiered another hard-hitting film about the Lebanon War, called Lebanon, direction and script by Shmulik Maoz. The entire film takes place within the claustrophic confines of a tank, during the first day of the war in 1982.

Based on a true personal story, the narrative is about the crew within the tank, their terrible wartime experiences, as their tank gets lost on its way north through southern Lebanon. Originally sent to search a town that has already been bombed by the air force, the tank's mission quickly becomes more complicated. The sights and sounds of war are hard-hitting; the tension of the nightmare is palpable; the fear and desperation are real – all making the film a very strong and authentic statement about the chaos of war. On the inside of the tank the soldiers have written: Man is steel, this tank is only iron.

The four-man crew of the tank include: Assi, the tank commander who loses control, Yigal, the driver who is an only son, Herzl, the loader, who is the rebellious and questioning one; and Shmulik the new gunner, who freezes at the first order that he's given to shoot, but later takes command and gets them out of a tight spot. These are just four inexperienced young men.

The film was screened at the Jerusalem Film Festival to a packed house of friends and family of the cast and crew. At the screening, Katriel Shechori, director of the Israel Film Fund, told the audience that it was "a great experience for me to accompany the production of this film because it reminded me of certain chapters of my own that I would like to forget."

From Shechori's remarks and from the production of so many films on the subject, we can see that Israeli society is still wrapped up in the traumas and memories of the wars in Lebanon – from the 1982 war which lasted 18 years, until the 2006 Second Lebanon war – and still worried about the ongoing build-up of Hizbollah in Lebanon today.

The Jerusalem Film Festival evening included a short film in memory of Uri Sabag, one of the producers of Lebanon, who passed away just about a year ago. Sabag's production credits include the following Israeli features: Yana's Friends, Saint Clara, No Names on the Doors, Things Behind the Sun, Beitar Provence and Shellshock.

An other "We shoot and cry" movie