An intimate look at an Israeli Sufi 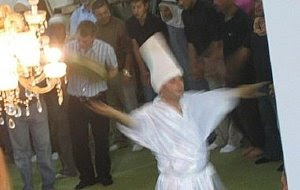 Filmmaker Vered Osman's documentary film, Abu Ali, is an intimate portrait of a charming and special man – Khaled Abu Ali, a religious Muslim actor and director at the Acco Theater.

Abu Ali, who lives in Saknin in the Galilee, is a man of grace and inner peace. He is comfortable and content with his work, his surroundings and his faith. His dedication to his work in theater leads him to do workshops for ultra-orthodox Jewish young men and permits him to accept a request from two of his Jewish theater colleagues to direct a play about the rebuilding of the Temple – even though the implication is that the Temple would be rebuilt on the ruins of one of the holiest places in Islam, the Al Aksa Mosque and the Dome of the Rock in Jerusalem. Abu Ali is a fascinating and compelling figure who opens his entire world to the camera.

I know Vered Osman for a long time. We worked together on training a "Moderate Voices for Progress" group of young filmmakers. The program was a collaboration between the International YMCA of Jerusalem, the YMCA of Greater Hartford, and the Gesher Multi-cultural film fund. Vered was the Gesher film specialist who provided these young people with an ongoing filmmaking workshop. Her special talent was in encouraging the creative expression of each and every participant in the workshop. The fruits of this program were screened "in progress" at the 2009 Jerusalem Film Festival in a program entitled Common Language.