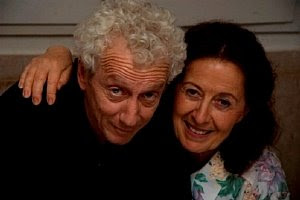 Perhaps the most touching and sensitive of this year's crop of Israeli feature films is Jorge Gurvich's Mrs. Moscowitz and the Cats בדרך אל החתולים . The film is a beautifully made and sensitive study of the loneliness, fear and limitations of growing old alone.

The film stars Rita Zohar who won a prize from the Jerusalem Film Festival's Wolgin Competition for her role as Yolanda, a retired French teacher suffering a lengthy convalescence in a geriatric rehab center, and Moni Moshonov, who is encouraged to show his tremendous acting talent in the role of Shaul, a man with a lot of joy of life, who makes Yolanda feel young again.

Yolanda lives alone, with no one around but the wailing cats under her window. When she falls down the stairs in her apartment building and wakes up in a hospital geriatric unit, she's sure that there has been a mistake. But she has broken her hip and ends up staying at the rehab center for a lengthy period. There, she makes two wonderful and very different friends -- Allegra, a woman who lives with a terrible fear of being alone at that moment when death will come, and Shaul, a man with his own demons who has the strength to reach out to Yolanda and teach her to love again.

The filmmaker, Jorge Gurvich, is well-known for his award-winning short drama, The Shower, a hard-hitting Holocaust drama, So We Said Goodbye, and the documentary, Next Year in… Argentina. He is also recognized as an outstanding cinematographer, having shot numerous Israeli features, documentaries and shorts.

Mrs. Moscowitz and the Cats is available from the producer, Amir Harel at Lama Films, amir@lamafilms.com
Posted by Amy Kronish at Monday, August 10, 2009