Cause of Death, directed by Ramy A. Katz, is a compelling documentary look at a family’s need to know the truth about how their son died.  This is the story of a Druze policeman who gave his life in the line of duty, and his brother who is desperately trying to understand the true story of what happened that day.

The Israeli Druze community is known for its loyalty to the State of Israel and the men of the community serve in the army and the police.

In March, 2002, during the 2nd Intifada, police Sgt. Major Salim Barakat, died trying to stop a terrorist attack at a Tel Aviv restaurant.  Salim was declared a hero and his brother, Jamal, has been attending annual ceremonies in his memory.

Cause of Death proceeds with suspense and takes us along a journey as Jamal considers all the possibilities.  Even though the police consider his brother to be a hero because he made the ultimate sacrifice in protecting people at that restaurant that day, it is not enough for Jamal and his family.  Jamal feels that the trauma lives on, even after so many years, and he needs to know the truth. 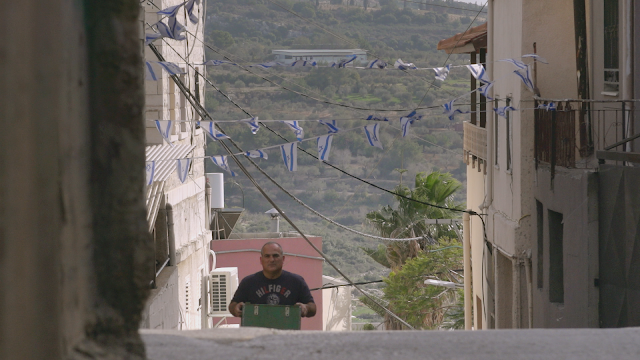 In this photo, we see Jamal carrying his brother’s police records and mementos, to his home in the village of Yarka in the north of Israel.

Jamal suspects that something is amiss in the story that the police have reported to his family.  Did Salim kill the terrorist?  If so, then who killed him?  Since his brother was dressed in civilian clothing, it was not clear whether he was killed by the terrorist or by an armed civilian who saw an Arab and mistook him for the terrorist himself.  Was the security establishment trying to cover up this flagrant act of racism?

The film tells a fascinating story, 79 minutes, and is available from Go2Films.