Begin: The Leadership Years, directed by Levi Zini, is a fascinating three-part documentary series, produced for broadcast on Israel TV.

Menachem Begin was elected prime minister in May 1977 in what was considered a tremendous political upheaval.  His days in the prime minister’s office and his Likud party changed the face of Israel forever.  Using a wealth of archival materials and many interviews, this documentary series provides a fascinating look at Menachem Begin’s particular brand of moderate politics.
The first episode deals with his extraordinary vision in making peace with Sadat.  This month, we celebrate the 40th anniversary of that amazing event. 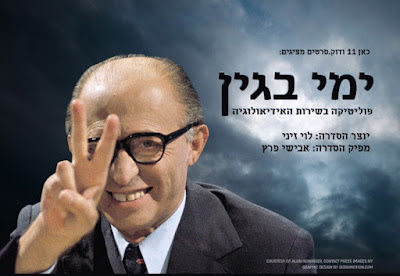 This episode has already been broadcast on Israel TV.  You can see it here on youtube (no English subtitles).

Two additional episodes will be broadcast on Israel TV on April 3 and April 10.

My husband was particularly impressed by the two episodes which we saw at the Jerusalem Cinematheque this week.  You can see his article, published today, about this series and about Menachem Begin on the Times of Israel website.

I sit on the joint film fund of the Gesher Multi-cultural Film Fund and the AviChai Foundation and I am proud to say that we provided some funding towards this important documentary series.