Red Cow, the new debut film by Tsivia Barkai-Yacov, tells the story of Benny, 17-years-old, who lives with her father.  Her household is an interesting one -- her father encourages her to don tefillin for morning prayers and her mother died at Benny’s birth.
Benny’s name, short for Binyamina, draws our attention to her ambivalent attitude toward her role as a female within her religious community.  Another cue, perhaps not so subtle, is the extreme close-up on Benny’s red hair, which opens the film.  This is certainly a reference to the red color of the cow in the title of the film, and already a hint, in the first shot, that Benny herself might become a sacrificial lamb.

The fascinating part of this film is the context – Benny and her father live in a small apartment which looks out at the Dome of the Rock, in an enclave surrounded by Muslims, perhaps in the village of Silwan, right outside the Old City of Jerusalem.  Her father is a leader of a right-wing group of zealots who favor the use of violence in order to stop the evacuation of hilltop youth at Amona, and more importantly believe it is their duty to bring about the destruction of one of the most holy Muslim sites, the Dome of the Rock, thereby permitting the rebuilding of the Temple in Jerusalem.  According to the Bible, in order to re-establish prayers in the new temple, they need an unblemished red heifer which must be sacrificed. Now that a sacred red heifer is found, they are that much closer to their goal. 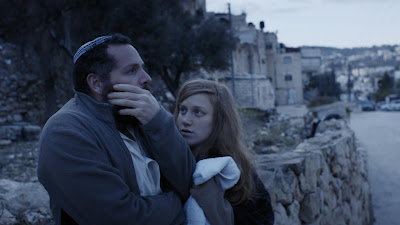 Notwithstanding the wonderful photography and composition of each scene and the interesting political context, the rest of the film is a poorly scripted story of a girl’s dissatisfaction with her community (she goes so far as to tell her father that his plans could bring about World War III) and her sexual awakening in the arms of another girl. Her authoritarian father’s reaction when he learns of this homosexual affair is quite painful to watch.  But more importantly, we see how the affair becomes the most important journey in Benny’s life – more important than the religious and the political.