A New Romantic Comedy -- And Then She Arrived

And Then She Arrived (ואז היא הגיע) directed by Roee Florentin, is a romantic comedy, which I thoroughly enjoyed.  Dan is a 30-year-old good-looking lawyer from an Ashkenazi family, who loves music and the Haifa Hapoel soccer team. He is engaged to marry his high school sweetheart. Then he meets Meirav.

Different in every way from his fiancée, Meirav is filled with life, dreams and is so much more compelling than his strait-laced girlfriend.  But falling in love is not so simple and there are clear obstacles along the way. It’s as if they live in separate worlds – Haifa and Jerusalem, educated and uneducated, Ashkenazi and Mizrachi, spicey food and tasteless food, and more. 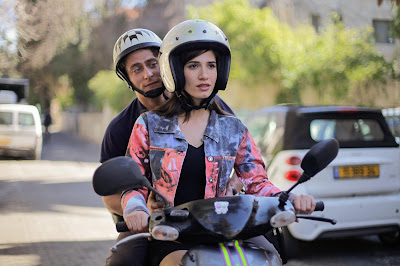 The Mizrachi-Ashkenazi divide is portrayed here up front and center.  Meirav is from a Kurdish background and lives in an old building which houses Jews from a wide variety of exotic places.  She’s uneducated – but she has flair and designs fantastic clothes.  Her mother is an overly-expressive and wonderful ethnic character, currently involved in a court case with an equally expressive upstairs neighbor!

Both Dan and Meirav are already emotionally committed to other people.  Meirav’s boyfriend is Argentinian – he says being a Latin lover is just like being Mizrachi – it’s the same thing!  Dan’s fiancée notices that something is awry and puts things on hold, freeing him to pursue Meirav.

This is a feel-good, low-brow film, filled with good music, and a fair amount of superstition and charm.  Gidi Gov, in a cameo appearance, plays the judge in one of Dan’s court cases, who helps Dan figure out how to know if this girl is the “one”.

And Then She Arrived is available from Israelifilms
Watch the trailer.

Labels: --And Then She Arrived, comedy, feature films, romance