Opening the Gates of the Soviet Union

Operation Wedding by Anat Zalmanson-Kuznetsov is a documentary thriller about refuseniks, leaders of the struggle to leave the Soviet Union.  In 1970, the filmmaker’s parents were leaders of a group of Soviet Jewish dissidents who planned to hijack a plane in order to escape from the USSR.  It was called the Leningrad Hijacking and they were all caught by the KGB.

They were refuseniks, having tried legal means to leave a land of tyranny, they were forced to resort to desperate means. The Russians saw them as terrorists, but human rights activists in the West saw them as heroes. The filmmaker’s parents were Jewish heroes of the 20th century, fighting for freedom.   Sylva Zalmanson was sentenced to 10 years in prison and Edward Kuznetsov was originally sentenced to death.

In this film, we see them today as compelling individuals.  Edward Kuznetsov, a greater-than-life figure, has a wonderful sense of humor, even after all that he lived through.  And Sylva Zalmanson shows us charm – as she waltzes and smiles on a visit back to the prison where she was held – and bravery for having pronounced loud and clear, at her KGB trial, “Next Year in Jerusalem”. 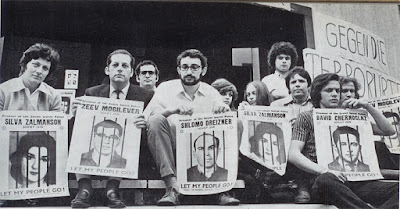 The film includes startling period footage of the refuseniks, the KGB, “Let My People Go” demonstrations, and American news coverage of the KGB show trial.  The film also includes the story of Golda Meir and the behind-the-scenes international diplomacy that saved the lives of the two ringleaders who had been sentenced to death.

While in prison, Edward Kuznetsov wrote two books about the struggle against an oppressive government, both of which were smuggled out to the West where they were published.

This is the story of two people who, through the brave risks that they took, were able to help pressure the Soviet Union to open its doors for thousands to emigrate in the future, thereby playing an enormous role in the unfolding of Jewish history in the contemporary period.