It is interesting that so many films over the last decade in Israel have included major biblical motifs.  For example, three films that referred to the Akedah story (sacrifice of Isaac) were Footnote, My Father My Lord, and Trumpet in the Wadi.

In honor of the upcoming holiday of Rosh Hashanah, on which we read from the Torah about Hagar and Ishmael (Genesis 21), I have chosen to write about a feature film, Harmonia by Ori Sivan, based on that story.

You might remember that the biblical story is about Abraham and Sarah and Hagar.  Abraham and Sarah are unable to have a child.  Together with Hagar, Abraham fathers Ishmael.  But after her own child, Isaac, is born, Sarah becomes jealous of Hagar and Ishmael and insists that Abraham send them away.

The blowing of the shofar (ram’s horn) on this day is meant to remind us of the ram that was found in the bushes providing Abraham with an alternative sacrifice instead of his son, Isaac.  In a study session with Avrum Burg, however, I learned that the blowing of the shofar on Rosh Hashanah also reminds us of Hagar’s crying out for help in the desert, after she has been exiled together with her son, Ishmael.

The contemporary version of the story, as seen in the film Harmonia, tells about three people in the Jerusalem Symphony Orhestra. Sarah is the harpist, her husband Abraham is the maestro, and Hagar from East Jerusalem is a young French horn player.  After Sarah and Hagar form a special friendship and Hagar is present at Sarah’s miscarriage, she offers to her friend to have a baby for her, together with her husband Abraham. 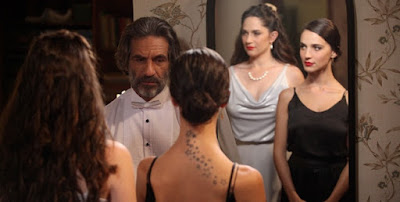 Although the film is rather slow-paced, it is nevertheless a beautiful study of three people, and how they manage their relationships.  It is also about their two sons – Ishmael and Isaac – both of whom become accomplished musicians.  A concluding and dramatic musical encounter makes this film particularly poignant and relevant for today.

We, the children of Isaac and Ishmael, need to learn to live together in this supposedly "holy" land. This film hints at the importance of the descendants of these forefathers coming to grips with reality and learning to live in coexistence.

Harmonia is available from Go2Films.