The film, The Jerusalem Dream, directed by Meni Elias, tells the story of Operation Moses during the late 1970s.  It is a tale of sacrifice and hardship on the part of the Jews of Ethiopia who decided to undertake the long and difficult trek to Jerusalem.

Using the interview format of “talking heads”, the film focuses on five different families.  Their stories are told from their own perspective and in their own words.  This is a strangely compelling format – we watch as they talk, as they smile and as they cry.  And all of this is interspersed with beautiful landscapes and footage from Ethiopia. 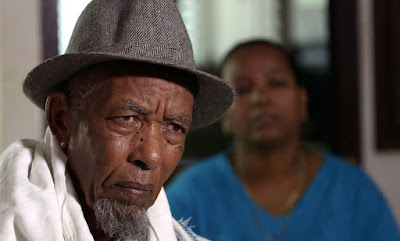 The participants talk nostalgically of their memories growing up in Ethiopia, the cornfields, herding the goats, playing children’s games.   Then they talk of their terrible sorrow that all of this ended, especially since there was so much danger and tragedy as they trekked to Sudan and were finally airlifted to Israel.  The story is in the telling – their compassion, their emotion, their memories.  They talk of the loved ones who were lost due to thirst and hunger and disease.  There was so much death that one man remembers his father begging God that someone in the family would survive to make it to Jerusalem.  These people paid a tremendous price.

The film The Jerusalem Dream (documentary, 51 minutes) is available from Ruth Diskin Films.
Posted by Amy Kronish at Sunday, August 14, 2016