Ben Gurion: Epilogue, directed by Yariv Mozer, is a new documentary film about David Ben Gurion, the first prime minister of Israel.  He was the visionary who ran the Zionist enterprise during the years before the establishment of the State, who declared the of the State of Israel in 1948, and served as prime minister for 13 years.

The film makes use of an unknown interview which was conducted in 1968 by Clinton Bailey, a young American journalist.  The film of the interview was found in a film archive and the soundtrack was uncovered in a completely different archive!  Here we meet a steadfast and dedicated man of surprising charm, great humor, vision, and even surprising modesty.  He states quite clearly that a single person doesn’t change history and that the things that he was able to accomplish in his lifetime were built on the deeds of others.

This remarkable interview is accompanied by stupendous footage of Ben Gurion during his early days in Eretz Israel, at the beginning of the 20th century, and later in life working as a farmer during his years living at Sde Boker. Some of the subjects that are dealt with include: his unpopular decision to accept German reparations, his interest in Buddhism, and his love for his wife Paula, who had passed away just a few months before. 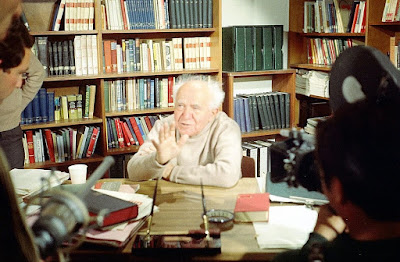 Ben Gurion: Epilogue is a documentary film which provides insight into an extraordinary man, who he was and what he believed.  Perhaps most importantly, it revisits Ben Gurion’s resounding desire for peace.  He states unequivocally, “If I would have a choice, between peace and all the territories which we conquered last year, I would prefer peace.”   This is a reference to the territories that Israel conquered in the 1967 war.  Even though many Israeli leaders have espoused this ideal of trading land for peace, only Menachem Begin, in the peace with Egypt, has been brave enough to actually take this step.  If only we had leadership today who could act on this ideal.