A Tale of Love and Darkness


The gifted actress, Natalie Portman, has created her first film as a director/screenwriter.  The film opened last week in Israeli cinemas. 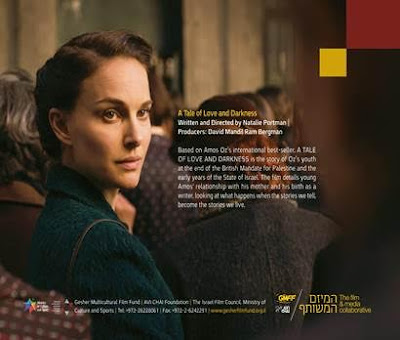 A Tale of Love and Darkness, which was screened at Cannes (out of competition), is based on the autobiographical book by Amos Oz about his growing up in Jerusalem during the end of the British Mandatory period and the early years of the state.  The film is mostly about Amos, the young boy, and his relationship with his parents.  His father was a staid librarian.  In contrast, his mother was a lonely woman, a bit of a romantic, searching for the elements that she had imagined when she came to Palestine from Poland -- beauty, passion, hard-work and bravery.

The film is a creative adaptation of the Amos Oz book, including dramatized dreams and visions which are stories told by the boy's mother.  And it also shows some wonderful re-enactments of Jerusalem scenes of that period.  However, it is a bit disappointing in that it only provides superficial historical context of the period and what was going on at that time.

The Ha'aretz newspaper film critic, Uri Klein, called the film "dreary" in his review.  It is true that the film is slow-paced and perhaps does not offer enough emotional depth.  However, the "dreariness" is an authentic reflection of their poverty-stricken lives in Jerusalem at that time -- something that helps us understand the little boy's mother's loneliness and melancholia.  The film is a unique literary adaptation, a period piece.  The filmmaker has chosen to use voice-over as the narrative voice that represents the author today, and it is quite hard-hitting.

The film is only a partial adaptation of the Amos Oz book.  Portman has decided to focus mostly on the boy and his mother, leaving out much of the lauded autobiography.  But a literary adaptation cannot be expected to cover everything from the book that it is dramatizing.  More important is the question about whether or not it interprets with depth and creativity the material that it chooses to portray.  And I would say that it certainly accomplishes this!
Posted by Amy Kronish at Wednesday, September 09, 2015