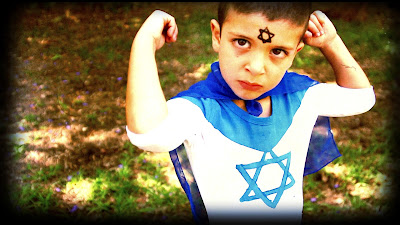 10% What Makes a Hero, by Yoav Shamir, is an entertaining documentary look at what makes a hero, what makes someone go against the societal trend and do something altruistic because of what he believes.  The filmmaker looks at American heroes such as a mild-mannered black man in Harlem who saved a man who fell on the subway tracks; he investigates Righteous among the Nations; and he interviews an anti-apartheid activist.


Shamir follows the Israeli Yonatan Shapira who was the airforce pilot who led a group of pilots to refuse to bomb targets in the West Bank and Gaza, and has more recently become an anti-occupation activist.  We meet an ideological and very brave Shapira who has accepted for himself a personal mission to go against Israeli society in order to stand up for what he believes.  The filmmaker follows Shapira to a protest demonstration against the placement of the separation wall in Bi'lin in the West Bank where the camera documents the use of teargas by the Israeli soldiers against the demonstrators.


The filmmaker tries to understand whether heroes have any common characteristics.  What makes people risk their lives for other people? The filmmaker tracks down scientific researchers who try to uncover the secrets of what creates heroism.  The findings are interesting but more important,  the viewer asks him/herself whether he or she would have the strength of character that would permit or enable or motivate one to take a risk to save another human being.


With humor and charm, filmmaker Yoav Shamir offers a film that talks to each and every one of us as individuals and makes us question whether we would ever have the social consciousness or capacity to stand up for what we believe, to risk our own life for that of another, or to take a heroic stand in any way at all.


Contact filmmaker Yoav Shamir for information on distribution of 10% What Makes a Hero (documentary, 89 minutes).
yoavshamir@gmail.com
Posted by Amy Kronish at Tuesday, July 09, 2013