Do you ever look back on the past and wonder how things might have been different?

Director/producer/scriptwriter Eli Cohen looks at  this subject in his latest feature film, Hora 79.  This is a nostalgic, wonderful film about the members of a dance troupe, now a  group of middle-aged men and women.  In creating an homage to Israeli folk-dancing, they get together to dance the debka and hora as they did 33 years before. 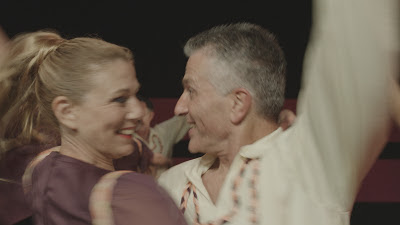 The troupe broke up years ago following what was apparently a tragic accident.  When everyone gets back together to rehearse, there is tension, nostalgia, and plenty of guilt to go around.  As the memories surface and the betrayals become clear, members of the troupe rebuild relationships, tell stories, and many try to hide details about their tragic lives.  The depth of the individual stories is surprising; the characters are diverse and realistic; and the dance scenes are wonderful!

Filmmaker Eli Cohen is well-known for his previous feature films -- Summer of Aviya (1988) and its sequel Under the Domim Tree (1995), and his first feature film, Ricochets (1986), which was produced as a training film for the Israeli army and was shot on location in Southern Lebanon.  The latter prizewinning film deals with the War in Lebanon and was originally conceived as a series of discussion films for soldiers on issues of moral ambiguity.

available from: Eli Cohen, cohenelik@gmail.com or Slonim Film Production.  In the U.S., the film is available from Israeli Films.
Posted by Amy Kronish at Thursday, July 11, 2013