Soldier on the Roof, directed by Esther Hertog, is a fascinating documentary look at the 800 Jews who live in the midst of the Palestinian city of Hebron (Arab population estimated at 250,000), and at the Israeli soldiers who are posted there to protect the settlers and to police the Israeli-controlled area (about 20% of the city).  The filmmaker goes to live in a caravan within this settlement and documents the lives of the settlers and the soldiers.  Without being judgmental, she lets the settlers, their families and the soldiers tell their stories.  The Palestinians of Hebron have no voice in this film. 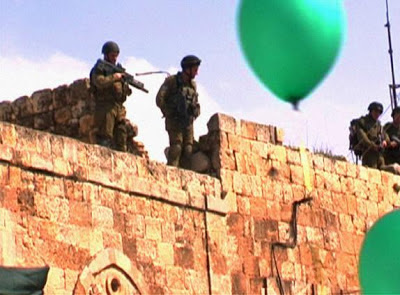 We hear Jewish children express hatred of Arabs.  We see soldiers frisking Arabs on the streets.  We learn about the ideology of the settlers.  We feel the tension, see the provocations but there are no neighborly relations between Jew and Arab here.  We see Arab homes that have been evacuated in order to separate between the local population and the settlers.  The settlers talk about how living in Hebron creates an unbroken link to our ancient forefathers and the film takes us inside the Cave of the Patriarchs (Machpelah) where Abraham, Isaac and Jacob are buried, and we try to feel that link.  But we do not see any effort of the settlers to reach out to the local Palestinian Arab population.


The film is a collection of vignettes and encounters, permitting the settlers to talk about their ideology and relate their opinions openly and honestly.  Some of it is quite shocking and even disconcerting -- One man explains that he only wants to banish those Arabs who want to banish or kill him.  He doesn't want to kill them, only deport them.  But, he says, he's willing to live side by side with those who don't want to kill him, who are willing to live and let live.  He doesn't realize perhaps that his very presence in the midst of Hebron raises the level of tension to such a degree that so many Arabs feel hatred towards  him.  As if that is not enough, he goes on to explain that there are Jews who are much more extreme, who are not willing to have any Arabs living in a Jewish land!


Of course, this immediately brings to mind the story of Baruch Goldstein, who slaughtered 29 Palestinians at prayer within the Cave of the Patriarchs in 1994.  This massacre, which took place on Purim day, by a religious Jew, helps to form my opinion about the small enclave of settlers who live in the midst of Hebron.  They are a provocation to the local Palestinian population, creating tension and humiliations and they have no desire to live in peace with their neighbors.


The film's publicity material describes the filmmaker, Esther Hertog, as a visual anthropologist.  In my opinion, she deserves a lot of credit for documenting a phenomenon in Israeli life which endangers any possibility of moving forward with a peaceful resolution of the conflict.

Labels: --Soldier on the Roof, Arab-Jewish relations, Cave of the Patriarchs, Hebron, Palestinians of the West Bank and Gaza, settlers, West Bank