The Hungarian Cube: A Journey with Andre Hajdu (directed by Gilad Inbar) is a new bio-documentary, providing an intimate look at one of Israel's foremost composers, a winner of the Israel Prize for Music (1997).  Young Israeli musicians were brought up on his music -- I recall my daughter playing some of his pieces during her years as a clarinetist in the Jerusalem Youth Orchestra. 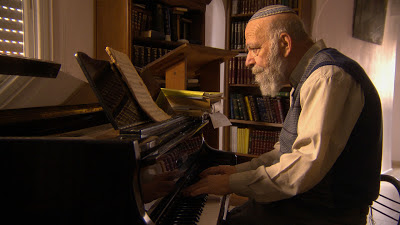 At the beginning of a concert of his music, Hajdu tells an audience: "I hope you will not only enjoy but also suffer a little because these things aren't simple."  His music -- quite unique and even eclectic in style, not standard in any sense -- accompanies the entire film, and is described as having theatrical flavor.

Hajdu, now 80-years-old, talks about the difficulties of his youth, growing up in Budapest during the terrible period of the Nazi occupation and the difficult years under the Russians. He travels, with his wife, Ruth, to Budapest, swims in Lake Balaton, teaches a master class in improvisation, visits childhood friends with whom he discusses issues of identity and the central source of inspiration that the Holocaust has played in his life.  We learn of his work to collect and preserve gypsy music  and we visit Ruth 's Catholic family in rural France.

Hajdu is a charming and eccentric character in his personal life -- with his wife and adult sons, and in his relations with friends and colleagues.  He has become a religious Jew and has written melodies so that Mishnah texts can be sung aloud.  We meet his six diverse sons:  one lives in Paris; one is a haredi educator; one is a businessman who had serious questions about circumcising his son;  one is a Gush Khatif  evacuee; one shares with his father his "ideology" that he prefers to live with his girlfriend before marriage; and one is a Jerusalem tour guide, teaching his aging father to ride a Segway!

The Hungarian Cube: A Journey with Andre Hajdu (documentary, 72 minutes, 2013) is available from Ruth Diskin Films.

Additional bio-documentaries about personalities in the field of Israeli music, recently reviewed on this blog: