In Israel today, the pop singer, Rita, has become a singing sensation. Born in Iran in 1962, she came to Israel at the age of 8 with her family.  Rita was married to the popular composer and singer, Rami Kleinstein and they have two daughters - Meshi and Noam. 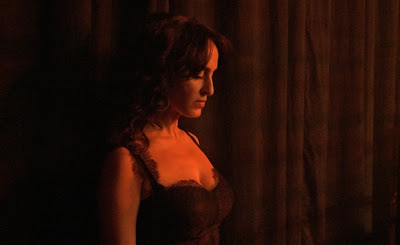 Documentary filmmaker Ayal Goldberg follows Rita in his film, Rita Jahan Foruz, over the course of a year.  We accompany her as she travels to Istanbul for a concert; we watch as she talks about growing up in Iran, how as a child she had to hide the fact that she was Jewish; we feel for her as she talks about her divorce and her obsessive need to be withdrawn from others.

Rita is however very connected to her family -- we see her singing and fooling around with her daughters, cooking for her extended tight-knit family, her relationship with her aging father and talking about the pain that he has suffered in his lifetime. She is close to her mother, also a great singer, an elegant woman. Together they travel to Los Angeles to visit her uncle, her mother's brother, and in a touching scene, she sings in Farsi with her uncle and talks about memories of her childhood.

She has become an international phenomenon and a cultural ambassador.   An internet headline states: Rita's music succeeds where diplomacy can't!

As a result of her latest album, My Joys, recorded in both Hebrew and Farsi (which is her native tongue), she has surprisingly become a hit in Iran!  In a great scene, she skypes with a fan who explains that her album is obviously not available in shops in Iran but that bootleg copies are available!

In March 2013, Rita was invited to sing at the United Nations.  The U.N. delegate who introduces her refers to the magic of music to transcend cultures and build bridges and connect people.  In the hall of the General Assembly, she sings and quotes classical Persian poetry and tells the audience in Farsi: When you ignore the pain of others, you are not worthy of being called a man.

Rita Jahan Foruz is a documentary of 91 minutes, available from Go2Films.  A shorter version will also be available soon!