Dancing in Jaffa, directed by Hilla Medalia, was this year's film that opened the DocAviv Film festival in Tel Aviv.  It is a full-length (87 minutes) documentary film about breaking barriers between Jewish and Palestinian youngsters in Jaffa.

The following is a guest posting by my daughter, Sari Kronish, who has previously posted reviews on this blog --

Pierre Dulaine was born in Jaffa in 1944 and was four-years-old in 1948, when his family - Palestinian mother and Irish father - was displaced. He grew up in the United States and became a ballroom dancer and teacher. As he says very early on in the film: his dream was to come back to his hometown one day and impart some of his life lessons to the children of Jaffa. The documentary film Dancing in Jaffa tells the story of how he fulfilled this dream.

Pierre decided to bring his successful New York City based project Dancing Classrooms to Jaffa. The project is not simply about teaching ballroom dancing. Rather, dance is a tool for getting the children to break down social barriers, learn about honor and respect, treat others carefully, improve self-confidence, communicate and cooperate, and accept others even if they are different.

Four Jaffa schools are chosen to partake in the project: two Jewish-Israeli schools and two Palestinian-Israeli schools, though it becomes clear that at least two of the schools are partially mixed. Pierre confesses that he has a special kinship to the Palestinian children, not only because of his personal background but also because he wants to grant them the opportunity for a better life. The film includes a close glimpse into the lives of three pupils: two Palestinians, a boy and a girl, and one Jewish girl. The Palestinian boy is the son of a fisherman whose mother is a refugee from Gaza. The film even follows the boy on one of his trips with his mother to visit her family in Gaza. The Palestinian girl is introverted and mourning the death of her father. She slowly comes out of her shell during the film. The Jewish girl is also growing up without a father. Her mother is pushing her to win the contest and she's the one to explain that the project is not about winning the contest. 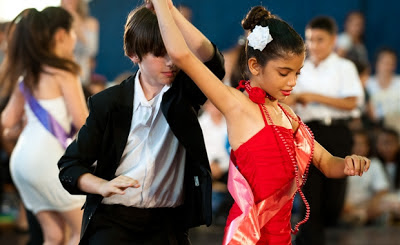 The film is filled with many touching, even humorous and slightly awkward moments. Pierre is a quirky, somewhat old-fashioned, well-intentioned character, who speaks simple Arabic and picks up a few Hebrew words as the project progresses.

Watching the film is a real treat, filled with beautifully shot scenes of life in Jaffa and a unique window into a life-changing experience, crossing gender, religious and national barriers.

Dancing in Jaffa is available from Go2Films.