Filmmaker Eran Riklis is well-known for his hard-hitting and oftentimes brilliant films about Arab-Israeli relations, and more broadly about the conflict.  His previous films, which have been written about widely on this blog (Cup Final, Syrian Bride, Lemon Tree, Human Resources Manager) also have a sharp element of political irony.

Fahed is a Palestinian kid who enjoys life, playing soccer and cutting school.  He lives in the Shatilla refugee camp, outside of Beirut and participates in a para-military program for Palestinian adolescents to prepare them to retake Palestine.  Suddenly, in the opening  sequence of the film,  his whole world is changed when his father is killed by a bomb from an Israeli plane.  His father has left him three things -- a love of their land, the key to their home in Palestine, and a small olive tree that his father grabbed and took with him when they had to flee their village so many years ago. (This explains the title of the film, Zaytoun, which means "olives.")

When an Israeli jet is shot down,  the pilot is captured by the para-military group and Fahed is one of the youngsters given the task of watching the prisoner.  An uneasy deal is struck between the pilot, who realizes that he must escape and make his way back home, and Fahed, who, in return for helping him to escape, gets the opportunity to go to Palestine.  Thus begins an improbable road movie as the two set off together, traveling south, to the Israeli border.

This film is about the tentative relationship that slowly develops between the two -- a hardened  fighter pilot, running for his life, and a wily Palestinian 12-year-old, bent on finding his family's ancestral village. 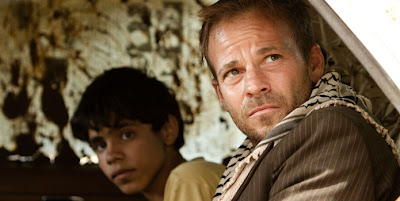 The film is similar to Riklis' Cup Final, which is also a road movie, taking place against the background of the beginning of the 1982 War in Lebanon.  However, in a much more fundamental way, this film is also similar to Riklis', Lemon Tree -- both films are based on the premise that not only the Jews, but also the Palestinians have deep roots in this land.