Mixing the Personal and the National

Israel: A Home Movie (Eliav Lilti and Arik Bernstein)כך ראינו  is a stirring documentary that uses home movie footage collected from attics and storage spaces. The filmmakers have created a mosaic that is the history of Israel from the 1920s until the end of the 1970s, a mosaic that combines the personal and the national.  The family scenes and scenes of everyday life are interspersed with footage of national events and footage of people on the move -- survivors arriving, evacuating children during the War of Independence, Arab refugees during the period of the establishment of the State, and new immigrants arriving from Yemen. 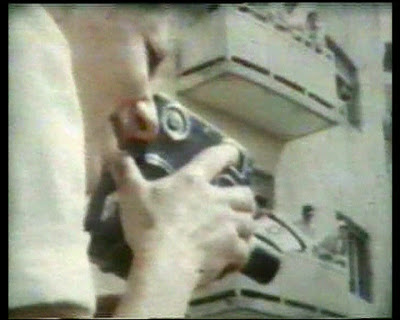 Not only is the footage unique and rare, but the soundtrack is not your typical narration.  It is made-up of people telling their stories, commenting as their footage is shown -- here is my father, here you can see me 50 years ago, this is my uncle going off to war -- singing songs and relating personal memories, commenting about those days filled with nostalgia, about people who are no longer with us, and asking how things might have been different.

I found the section of the film during the period prior to and following the Six Day War to be the most compelling.  We see Divided Jerusalem and shots of the Old City before the city is reunited.  Following the war, a special event is documented when eight couples get married at the Cave of the Machpelah.   We see Udi Dayan filming photos of his iconic father which he found all over the Arab market after the War.

Perhaps not surprisingly, there is a tremendous amount of footage of wars -- tanks, downing of planes, battlefields, military parades and the not-so-humane treatment of POWs.  The film concludes with the victory of the Likud in 1977 and the visit of Anwar Sadat.

It seems to be a common downfall of documentary filmmakers that they are unable to part with their footage!  Perhaps this film is also a bit too long (100 minutes)!  I would recommend watching it in two sittings!