The Lesson by Anat Zuria 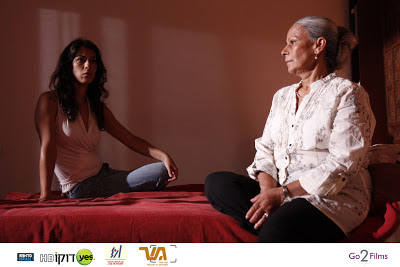 Anat Zuria is a talented documentary filmmaker who lives and works in the Jerusalem area and makes films that deal with religious women and women's issues -- check out Purity and Sentenced to Marriage -- both about issues of Judaism and women (both have previously been reviewed on this blog).

Her latest film, The Lesson (90 minutes, documentary),  is also about a religious woman -- in this case, a Muslim woman named Layla who grew up in Egypt and came as a young bride to live in Jerusalem with her new husband.  Layla is not her given name -- it is the name that was assigned to her when she came to live in Israel at the age of 15.  This is the first hint of strange circumstances, which even she appears not to fully understand.

Today, Layla is an elegant, mature woman who is learning to drive.  Through the discussions that she has with her driving teacher, we get to know her, to see her as a remarkable and expressive woman, and an intimate portrait is drawn.

We also meet Layla's family back in Egypt as she calls them via skype and we get to know one of her grown children -- her daughter Hagar who was brought up in Jewish schools.  Hagar writes compelling and beautiful songs -- but her mother, in a moving moment, expresses her disappointment that her daughter addresses God in Hebrew and not in Arabic.

As the circumstances of Layla's life are slowly unfolding before us, we realize that this is a complex story.  It is about the hardships of being a Palestinian in Jerusalem, the difficulties imposed by the  security wall/separation barrier, about loneliness and being  a woman on her own, struggling to hold on to her own identity and her ties to her past.  It is also about her troubled relations with her children and about their issues of national and religious identity.

A haunting and sensitive film, The Lesson, which won an award for best documentary at the Haifa Film Festival 2012, is available from Go2Films.
Posted by Amy Kronish at Monday, February 18, 2013

I loved this film too. What a treat to get to know this women and to see and experience life in jerusalem through her eyes. As much as is revealed also remains hidden, and the viewer is left with many questions. But this does not retract from the viewing experience or the sensitivity of the film.