The "occupied territories" refers to the areas that were occupied by Israel following the Six Day War of 1967. The "occupation" however refers to the fact that hundreds of thousands of Palestinian civilians live without democratic rights under Israeli military rule.

In recent years, there have been a number of important award-winning films that criticize the "occupation".  This includes the following documentaries -- Five Broken Cameras by Emad Burnat and Guy Davidi, The Gatekeepers by Dror Moreh, and The Law in these Parts by Ra'anan Alexandrowicz (all previously reviewed on this blog).

And now there are also a small number of feature films in this category -- including Room 514 by Sharon Bar-Ziv about the abuse of the power that soldiers exercise as an occupying army (previously reviewed on this blog), and a new one, Rock the Casbah directed by Yariv Horowitz. 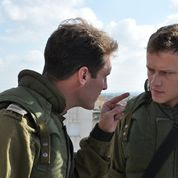 Rock the Casbah, which just won an award at the Berlin Film Festival and opened in Israeli theaters this week,  is a hard-hitting feature film (with extraordinarily high quality production values) about the issues and difficulties of policing the local Palestinian population in the streets of Gaza during the height of the first intifada.

The film tells the story of a fresh group of young soldiers who are assigned to catch some of the violent demonstrators in the streets of a densely populated area in Gaza.  The tension is palpable -- with the rock-throwing, the molotov cocktails, the fear -- and it provides you with a sense of what the soldiers had to deal with, how they coped, and the differences between them.  One of the group, Ilya, gets killed when two Palestinians drop a washing machine on his head from a rooftop.  As a result, the rest of the group is assigned to camp out on the rooftop and to keep an eye on the area.
Ilya's father is brought to see where his son was killed.  He cries and shouts -- why did you bring my son here?  The irony is that eventually Israeli society in general came to the same conclusion when the decision was made to pull out of Gaza.

As the days drag on and the soldiers continuously pass through the home of the family living below this rooftop, there are interesting scenes of interchange -- some charm, some cultural issues such as when the soldiers bring a dog into the home of the family (dogs are not permitted in Muslim homes or in Muslim places of prayer).  The family is afraid that people will call them collaborators since they are being forced to permit the Israelis to use their rooftop, but the soldiers understand that things are obviously more complex since the family must know who was on their roof when Ilya was killed.

There are great moral and ethical issues in controlling a civilian population by military occupation.  In contrast to the aggressive and violent behavior and speech of the other soldiers, one particular soldier, Tomer, is seen as a sensitive fellow who doesn't want to hurt anyone.  This film is basically about his journey -- if he were to identify the killer of Ilya, would he be able to press the trigger?