In the Aftermath of the Second Lebanon War

Who are the reservists in the Israeli army?  They are family men, ready to put on their uniforms when called upon, ready to make sacrifices and to endanger themselves for the defense of their country.
Post Lebanon, directed by Lior Agur and produced by Yahaly Gat, is a documentary film (52 minutes) that provides a look at the sacrifices that some of these men make -- the post-traumatic stress, the bodily injuries and ongoing rehab, the pain, the memories, and the loss of self-respect in dealing with the government bureaucracy.

Uri Lerner and Dubi Genish are friends -- survivors of a battle that took place during the Second Lebanon War (August 2006) in which their armored troop carrier received a direct hit.  This was a particularly difficult war because the Israeli military establishment was severely criticized for not having had a comprehensive strategy and for not having properly  equipped the troops. 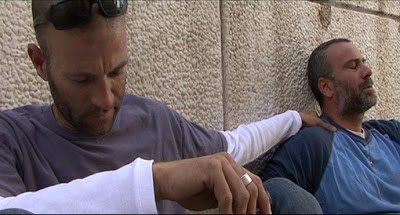 Uri and Dubi open their souls to the camera.  They are scarred -- one emotionally and one physically -- and the stories of their ongoing battles are heart-breaking.   Members of their battalion call Uri a hero because he bravely saved a number of men, pulling them out of the burning armored vehicle.  Even though he has received a medal for distinguished service from the IDF, he is unable to stop reliving the moment -- he talks about images, memories, questions and flashbacks.  One of the men that Uri saved is Dubi who was seriously injured in his right leg.  Dubi talks about the terrible moment when he thought he was going to die, the unbearable pain and his motivation to walk again.

These two men are family men, comrades-in-arms, who went to war ready to sacrifice for their country as reserve soldiers.  They talk candidly about the baggage that they continue to carry with them, how it has affected their lives and the lives of their families, and the difficulties they have vis-a-vis  the government in obtaining what they need -- not just benefits but also honor and self-respect.

This is a difficult film to watch but it is nevertheless an important one since it helps us understand the exigencies of war, from a very personal human point of view.

Post Lebanon was produced for broadcast on Israel TV Channel One and is available from the production company: Muse productions, fg_prod@netvision.net.il.
Posted by Amy Kronish at Thursday, January 10, 2013