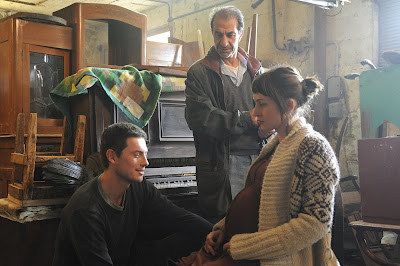 Restoration, directed by Yossi Madmony, premiered at the Jerusalem Film Festival last night.  It is a touching and sensitive study of a man and his relationship with his son.  A film about our attachment to old things and memory -- Mr. Fiedelman (Sasson Gabai) works at restoring antique furniture.  His partner of 40 years dies suddenly of a heart attack after a visit from a prostitute.  Previously, Fiedelman worked with the wood and his partner did the dealings with customers and suppliers.  Now, he has to handle all aspects of the business and he discovers that the situation is not so good.

His ambitious son, Noah, wants to close his father's shop and instead build an apartment building on the premises.  But Fiedelman is not so ready to give up his life work.  He pins his hopes on his new, young apprentice, who himself is hiding from the world and running from his family (though we do not learn why). The apprentice, who tries desperately to win Fiedelman's trust and help him raise the cash to keep his business running, is an accomplished pianist.  He entices Fiedelman into restoring an antique Steinway piano that they find in the back of the shop. Perhaps this will help them raise the funds needed.

Erez Kav-El won the award for best dramatic screenplay for his script for this film at Sundance. Restoration (Hebrew title: Good Morning Mr. Fiedelman) is available from the producer, Chaim Sharir.

It's interesting to note that two additional recent films deal with father-son relations --
Dusk and Footnote, both reviewed on this blog in the last month.
Posted by Amy Kronish at Tuesday, July 12, 2011