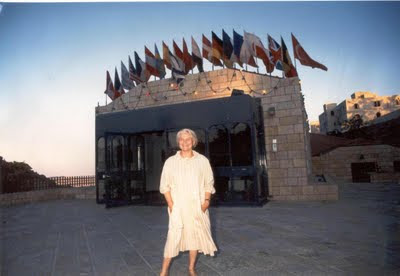 Yesterday, at the Jerusalem Film Festival, I saw a beautiful documentary film about Lia van Leer, by Taly Goldberg.  It is called simply Lia.

Using interviews with friends and admirers, this film presents a romantic and nostalgic look at Lia van Leer -- her life and her great achievements.  Winner of the 2004 Israel Prize, she was a pioneer in the field of art film programming and film archiving in Israel. She is the founder of the Haifa Cinematheque, the Jerusalem Cinematheque, the Israel Film Archive and the Jerusalem Film Festival.
During the 15 years that I worked as the Curator of Jewish and Israeli Film at the Jerusalem Cinematheque / Israel Film Archive / Jerusalem Film Festival, I worked closely with Lia van Leer.  She is a unique individual who has succeeded in establishing new institutions out of her own vision and passion.  In a country where film had been primarily seen as a form of entertainment or a propaganda tool, Lia, through her untiring efforts, has helped change that image and raise filmmaking to a new level.  As a result, film is now seen as an expression of culture and art, and is funded as such by government funds for cultural expression.  In addition, bringing about this new understanding of the importance of film has also impacted directly on the filmmaking voice of the country and the unique identity of Israeli films as seen today.

Following the screening, Lia van Leer was there, passing around little sachets of lavender to her well-wishers.

The film Lia (65 minutes) was produced with support of the Gesher Multi-Cultural film fund and the Dorot Foundation and is available from Lama Productions, Tel Aviv.

The following biographical information about Lia van Leer is taken from a biography that I wrote a few years ago for the Jewish Women's Encyclopedia.

Born on August 8, 1924 in Balti, Romania (Bessarabia), to an upper middle class Jewish family, Lia van Leer attended a public high school and spent summer holidays in the Carpathian mountains.  Highly assimilated, her family attended synagogue only a few times a year, and her father earned his living by exporting wheat.

In 1939, when she was 16 years old, her parents sent her on the long trip to Palestine to visit her sister who was living there.  She attended the Hebrew University in Jerusalem, and socialized with other foreign students.  The two sisters never saw their parents again.

She married Wim van Leer, the son of a Dutch industrialist, and they made their home in Haifa.  Wim was a journalist, playwright and pilot and together they traveled abroad, where they developed their interest in international cinema.  The van Leers would regularly invite friends to their home on Friday evenings to watch films which they would screen on their own 16 mm. projector. Thus the first film club in the country was formed – later to develop into the Haifa Cinematheque.  During these years, the van Leers also traveled by jeep to the kibbutzim in the new country of Israel, showing films which were otherwise unavailable.  The films which they screened were borrowed or acquired from abroad, and slowly they began to build their own personal collection of international film classics. This personal collection grew into the first film archive in the State of Israel, which was formally established as the Israel Film Archive in 1960, and accepted into the Federation Internationale des Archives du Film (FIAF) in 1961.

The collection grew over the years as Lia approached the international film companies and large Hollywood studios and requested that the distribution prints of their films, already subtitled into Hebrew, be deposited in her collection after the completion of their commercial run in the cinemas.  This was a revolutionary idea since distribution prints were regularly destroyed after an average five year period, but Lia persevered and succeeded in receiving thousands of films in this manner. Today, the Israel Film Archive collection holds more than 40,000 films, including the historically important collection of Carmel Newsreels, produced by Nathan Axelrod from 1934 to 1957, and all of Israeli cinema produced since before the establishment of the state.

The new premises, called the Jerusalem Film Center, opened in 1981 and house the Jerusalem Cinematheque, the Israel Film Archive and the Jerusalem Film Festival (established in 1984).  Each of these institutions was founded and directed (on a full-time volunteer basis) by Lia van Leer. The Jerusalem Film Center has had an impact far beyond its walls.  It is responsible for inculcating, in the hearts and minds of thousands of young people, the importance of cinema as a means of communication and understanding; it is a meeting place for Arabs and Jews to discuss cultural issues rather than political ones; the Israel Film Archive provides hundreds of films annually for screenings all over Israel and around the world; the Jerusalem Film Festival attracts distinguished film personalities annually and provides them with the possibility of meeting local audiences and discussing the art of cinema.

Honors and awards:
Jury member at Cannes Film Festival, 1983
President of the Jury, Berlin Film Festival, 1995
Medal of the City of Jerusalem
Medal of the City of Tel Aviv
President’s Citation for Volunteerism, presented by President Chaim Herzog, 1988
Israeli Ministry of Education Medal for Contribution to Cinema
Ordre du Merite, France, presented by President Mitterand
Chevalier des Arts et des Lettres, France
Honorary Fellow of the Jerusalem Film and Television School
Life Achievement Award, Israel Film Academy Awards
Jerusalem Foundation Prize in Honor of Teddy Kollek, 1999 – Presented to Lia van Leer, in recognition of her life’s work and contribution to the advancement of cinema in Jerusalem and her success in using the medium of film as a powerful educational tool, and as a means for promoting dialogue, creative expression, and understanding that extends beyond all borders.
Israel Prize, 2004
Posted by Amy Kronish at Sunday, July 10, 2011