"Who Will Build a House in Tel Aviv?"

I have already written about two documentary films that I saw at DOCAVIV festival at the Tel Aviv Cinematheque two months ago – Doma and The Collaborator and His Family.  I missed Life in Stills – but so many people have told me about it that I quickly obtained a DVD from Heymann Brothers Films in order to see it!

Life in Stills (הצלמניה), directed by Tamar Tal, is a refreshing film, combining nostalgia and charm!  It is the documentary story of a unique relationship between a 96-year-old woman named Miriam and her grandson, Ben, on the background of a family tragedy -- the violent death of Miriam's daughter/Ben's mother. Miriam came to Israel from Czechoslovakia in 1921 and together with her husband (who was a wonderful professional photographer) created a Tel Aviv icon – a photography shop which today houses literally thousands of negatives of classic and historic shots of early Israel.  People come to browse through the photos and there are requests from all over Europe for exhibitions based on the materials.  Ben travels with his grandmother to Frankfurt for the opening of such an exhibition and she addresses the elegant crowd in German with great humor and personality. 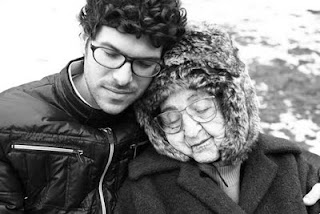 This is a film portrait of a remarkable, highly opinionated, spunky woman, who is willing to fight the Tel Aviv municipality in its efforts to demolish the building which houses her shop. A film of great nostalgia and charm, it lends insight into the developing story of Tel Aviv and the relationship between grandmother and grandson. Life in Stills (58 minutes) is available from Heymann Brothers Films.