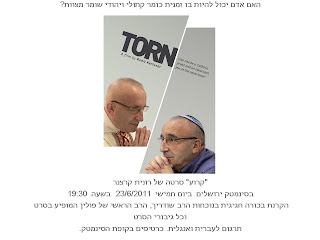 Please find here a guest posting by my husband, Ron Kronish, director of the Interreligious Coordinating Council in Israel.

Can one be a Jew and a Catholic at the same time? Are there extenuating historical circumstances that enter into this discussion? What happens when a man, who was given to a Catholic family as an infant by his Jewish parents and raised by them during and after the Holocaust, discovers his Jewishness at age 35 after he has been a Catholic Priest for many years, and only lately decides that he wants to come to live in Israel as a Jew and yet maintain his Catholic faith also?

All these questions and dilemmas are portrayed in a sensitive and empathetic way by Ronit Kertsner in a poignant documentary film entitled "Torn" that I saw this week at the Cinematheque in Jerusalem, together with  a packed auditorium of sympathetic viewers, both Christian and Jewish.

The film tells the story of Yankela Wechsler, also known as Romuald Waszkinel, who now at age 67 has come to live in Israel. He spent several months studying Hebrew last year in an ulpan at Kibbutz Sde Eliyahu in the Bet Shean valley, where he was warmly welcomed, albeit with some misgivings, by the kibbutz community (I have always been a fan of the kibbutz hadati movement since they are among the warmest and most open-minded Orthodox Jews in Israel) and now he lives in Jerusalem where he works at Yad Vashem.

Wechsler comes across as a sincere and serious individual, with a good sense of humor, and at the same time very emotional about his mixed Jewish and Catholic identity. He has been struggling to redefine that identity – as an ordained priest and as a man searching for his Jewish roots, as a man of faith, a man who believes deeply in God. He definitely sees himself as a Jew, yet at the same time, he wishes to not totally abandon his Catholic identity, which defined him for most of his life. Nevertheless, he wants to be accepted as a Jew in Israel. 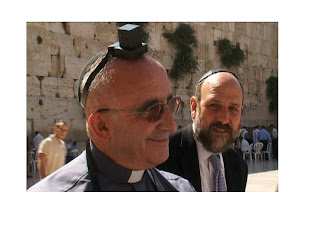 Can the State of Israel accept him as a Jew under the Law of Return? Certainly, the special circumstances of his being born a Jew during the Holocaust should play a central role here. Yet, one finds in the film legitimate debate and discussion of this dilemma—can one be a Jew and a Catholic at the same time?

Near the end of the long question and answer period after the film, I asked him about his application to become a citizen of Israel at the Ministry of the Interior. In response, the director of the film read a recent letter received from the Ministry in which they have agreed to grant him permanent resident status in Israel for 3 years.  The letter also states that after the 3 years, he will be permitted to apply to become a citizen. This somewhat positive response, she said, is a result of the publicity surrounding the case in the Israeli press, which followed the premier screening of the film in Tel Aviv at the DocAviv film festival in May.

I first met Wechsler a few months ago when he came to speak at a course on Polish-Jewish Relations that we sponsor at ICCI. I was impressed by his story then, and by the way he told it. And I was glad that someone in Israel has made such a moving and passionate film about this wonderful individual.

"Torn" is distributed commercially by Go2Films