Mixing the Personal and the National Narratives

My Sister Tikva, directed by Vered Berman, is a different kind of Holocaust memoir.

With much sensitivity and intimacy, it tells the story of a Holocaust survivor named Tikva, and leads the viewer on a journey, unraveling the details of her life. Born in 1941 in the Kovno ghetto, Tikva was moved from family to family, raised by four different sets of parents, until her journeys brought her to the United States.

Today, as an older woman, she travels to Israel to visit her brother, Yair, and the story of her life begins to unfold. 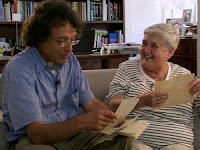 Tikva was born to Assia and Yosef, who must have been very special people to name their daughter, Tikva ("hope"), during those terrible times. Before they were killed in the destruction of the ghetto, they gave her to a devout Catholic couple. They took her in because the wife had grown up as an orphan and was taken care of by others and she believed that taking in a Jewish toddler provided her with the opportunity to repay what others had done for her. Tikva travels to Lithuania to visit this family of righteous Catholics who saved her life when she was just a toddler.

After three years of living with this family, Tikva's Aunt Nechama and her husband came to "rescue" her after the war and brought her to a D.P. camp and from there to Israel. Due to their dire financial straits in 1950s Israel, they sent Tikva, at the age of 12, to live with cousins in America.

Tikva's odyssey is a remarkable story. On the one hand, it is the story of one woman's life and on the other, it reflects the drama of the Jewish people in the 20th century – from death and destruction in a ghetto where she was born to loving parents who were forced to part from her, to a new and loving Catholic family, to an aunt and uncle who brought her to Israel where they found difficulty and hardship, and then to a fourth family in the U.S. where she grew into a mature woman. This is a story of heroism, drama, and the remarkable ability to overcome adversity.

My Sister Tikva is available from Go2Films.
Posted by Amy Kronish at Wednesday, October 28, 2009