In honor of the upcoming Other Israel Film Festival , Nov. 12-19, 2009 in New York, I have chosen to write about Zahra, a new documentary by Mohammad Bakri (60 minutes, 2009). The film is produced by Carole Zabar who is also the moving force behind Other Israel.

Mohammad Bakri is well-known for his acting roles (Beyond the Walls, Cup Final, Scar, Haifa, The Milky Way, Desperado Square) and for his controversial documentary films (Jenin, Jenin and 1948).

The film seeks to explain the main narrative of the Palestinian people. It helps the viewer to understand the great tragedy that they underwent as the state of Israel was established. Certain parts of the film attempt to shatter myths surrounding the events of that time. For example, the Palestinians who are interviewed differ in their interpretation of who was responsible for the departure of the Palestinians from their homes. Some adamantly blame the Arab leaders of the period who themselves fled Palestine and left the local population without leadership, and some blame the Jewish leaders of the time.

In his new film, Zahra, Bakri has chosen a completely different style. Combining the national with the personal -- he provides a personal family story that takes place on the background of the events of 1948. 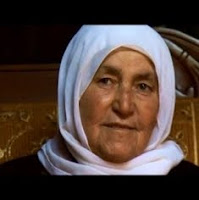 Zahra is the filmmaker's 80-year-old aunt, a remarkable woman, and the film tells her story of a traditional way of life. Zahra married her cousin Hasan, and in 1948, when she was 19 years old, with her first 2 (out of 10) children, fled to Lebanon. At that time, her husband was imprisoned by the Israeli authorities. Later, Zahra returned to her village, Al Bane, and soon thereafter her husband was released. Over the years, Zahra raised 10 children, almost single-handedly, since her husband died young and she worked picking olives to support them. She tells stories, talks about all the people they knew. We meet her children and see her many grandchildren and great grandchildren.

In a discussion with the filmmaker following a public screening of 1948 sponsored by the Interreligious Coordinating Council in Israel (ICCI), a number of years ago, Mohammad Bakri candidly described himself as a member of the younger generation of Palestinians who does not have personal memories of 1948. Therefore, he expressed optimism that dialogue and coexistence could flourish in the future as the memories fade. Bakri expressed his personal desire that every young Israeli – Jewish and Arab -- would see this film so that they could better understand the pain and suffering of those people who were displaced as the State of Israel was established. When asked by the audience to also deal with the other side of the same coin – that is, what he would show every Palestinian young person -- he expressed a desire for every Palestinian to learn more about the Holocaust, both through film and through literature, in order to better understand Jews. He emphasized that: Only by learning about the most painful chapters in each other’s history can we bridge the gap between us.

Both films – 1948 and Zahra are films created by an artist -- combining poetry, Arab music and songs, and a beautiful cinematic aesthetic. The films are available from Mohammad Bakri: mohammadbakri@hotmail.com
Posted by Amy Kronish at Sunday, October 25, 2009