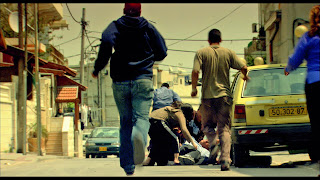 As the Jerusalem Film Festival is drawing to a close, awards were announced today!

The Wolgin award for best full-length Israeli feature film was awarded to Ajami. The prize, in the amount of NIS 120,000 (approximately $30,000), is divided between directors Scandar Copti and Yaron Shani, and producers Mosh Danon and Thanassis Karathanos.

Comments of the Jury: “The originality of the film comes from the inward gaze of the two directors on the complexity of Arab society in Israel and its relationship to Jewish society. The achievement of the script lies in the interwoven stories of the Arab residents of the Ajami neighborhood on the margins of Tel Aviv-Jaffa with Palestinian illegal workers and the Jews: their neighbors, the crime world, and the police. In addition to reflecting the reality of the situation, the film manages to hint at the tragic dimension of life in this context. The use of non-professional actors grants the film an aspect of quality and authenticity, and the energetic editing reflects the volatile reality.”