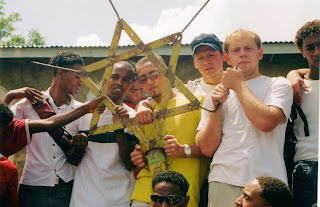 The Name My Mother Gave Me מונית לגונדר directed and produced by Eli Tal-El, is a unique documentary that provides the viewer with a glimpse into issues of personal identity of teenage Ethiopian Israelis.

The film tells the story of an emotional journey to Ethiopia with a group from a pre-army training program (mechina) run by Yemin Ord at Hazor HaGlilit. During the course of the journey, the members of the program become a unified group – Russian and Ethiopians together – all having experienced something very special which is about life in the diaspora, Jewish roots, identity, and family – all causing them to appreciate all the more the lives they live in contemporary Israel.

One of the teens defines himself as more Jewish than Israeli. Another talks about his love for the poetry of Rachel. This is a group of young people who have chosen to take a trip together to look for their roots, for the places where they were born. In Ethiopia, they are shocked to discover poverty, people working the land with primitive means, and so much illness. Yet it is also a land of great natural beauty, wild monkeys, and wonderful people.

In a small village in Gondar, Uri finds people who knew his family, and his godfather who held him at the time of his brit (circumcision). In a very moving moment, he blesses the crowd -- the village should thrive and everyone should be happy. Another boy finds his mother. A third, Yanesau, explains how proud he was to be identified as part of a Jewish group when they were in Addis Abbaba. A fourth, Yossi, takes the group to the waterfall near his village where he used to play. Then they continue into the village and find the abandoned synagogue which is now all locked up. The high point of the film is when they break into the synagogue, discover Hebrew holy books in this far-flung village, work together to clean up the place, and then spontaneously break into song and dance!

Some of the concluding comments of the participants tell it all -- one fellow realizes that now he understands better his parents and what they experienced while living in Ethiopia. Another says he feels the exile in this place. This is a film about identity, about unity of the Jewish people, about exile, anti-semitism, and issues of melting pot in contemporary Israel. What does the title of the film refer to? Some of the Ethiopians have taken on new names that sound Israeli. Uri/Gashau decides that calling himself Uri is running away from his real identity and he takes back the name his mother gave him.

The film is a documentary (56 min., 2008, in Hebrew and Amharic with English subtitles) available from Ruth Diskin films.
Posted by Amy Kronish at Monday, June 15, 2009

Labels: --Name My Mother Gave Me, Jews from Ethiopia

Amy,
I saw this film on TV a while ago and was deeply moved. Unfortunately, I didn't catch the title at the time, so I was very pleased to find it in your blog.
(Here as I'm linking your post about 'Strangers' on our June-July newsletter.)
All the best,
Rakheli