God of the Piano, screenplay and directed by Itay Tal, premiered at the Jerusalem Film Festival this week.  This is an effective and compelling film about music and obsession!

Based on his graduation film at Tel Aviv University, this feature-length film is Itay Tal’s first feature.

The basic story of the film is quite unsettling. According to the filmmaker, the entire screenplay was based on a particular germ of an idea -- he wanted to make a film about a woman who gives birth to a child with a birth defect, and since she cannot accept it, she exchanges the infant in the hospital nursery for another child.  He explained that only later did he decide to take this idea and make it about hearing loss and music

The film stars Naama Preis, a remarkable actress, who carries the entire film, appearing in every scene.  Her character, Anat, grew up in a family of classical musicians and is herself a concert pianist. The film opens with her performing, and her waters break while she is sitting at the piano and playing. 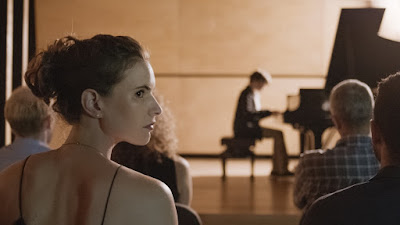 Following the screening, the lead actress talked about her own background –that she was a dancer and also played some piano when she was young.  She explained that she was pulled into the role by the obsessiveness of the main character, her disappointment in herself, and the tragedy for her when her deaf child is born.

This is a film about obsession, about the power of music, about talent and competition, about the pressures of being a child prodigy, about mother-son relations, and about fulfilling your dreams by pushing your child to the extreme. There are also difficult issues being raised here.  Not only has the mother stolen someone else’s baby, but her actions have caused us to think about the nature of musical talent and whether it is inherited or acquired.

I liked God of the Piano, especially the complex character of Anat.  I also liked the use of classical music as a unique character in the film. Not only is music heard constantly on the soundtrack, but the viewer is brought to consider the nature of musical talent and genius, especially in the area of original composition.  In fact, there are three composers within the film's story – the child pianist, Anat’s father, and a renowned musician who appears a few times in the film as the ultimate talent in the musical world.  Itay Tal did a wonderful job of recruiting musical talent – original music by Roie Shpigler and Hillel Teplitzki, piano playing and recording by Eran Zvirin.