Are you a fan of fashion and design?

Mrs. G. is a documentary film, directed by Dalit Kimor, about Lea Gottlieb (1918-2012), the great Israeli swimwear designer and manager of the Gottex brand of swimwear.

Lea Gottlieb had a difficult beginning, living through the Holocaust period in Budapest.  She came to Israel in 1949 with her husband and two daughters, at a time when the economic situation was very difficult in Israel.  Together, husband and wife founded the manufacturing company of A. Gottlieb, and later changed the name to Gottex.

Lea Gottlieb was an artist and had a vision.  She added style and tropical color to swimwear at a time when bathing suits were dull and drab.  She developed lycra, special prints and exclusive designs.  Many celebrities wore Gottex bathing suits, including Princess Diana! 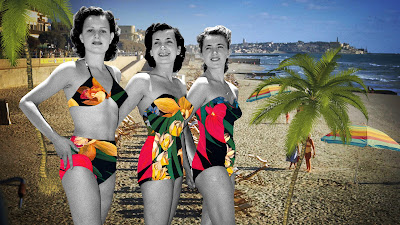 The film shows dozens and dozens of women modeling bathing suits and cover-ups over the years.  The most fascinating thing is to see the things that inspired Gottlieb, including the peace with Egypt, when she established a line inspired by ancient Egyptian motifs. We watch her as she works. We learn about her family, her husband and daughters who eventually joined the business.  And we learn about the turmoil and tragedy which was part and parcel of her life – together with the stupendous creative vision and international success!

Mrs. G. (documentary, 54 minutes) is a wonderful film for film festivals and is available from the producer, Yahaly Gat at Muse Productions, muse.prod1@gmail.com.