The Lost Crown, directed by Avi Dabach, documents the story of the Aleppo Codex, better known as the Crown. This is a fascinating film which, like a good detective story, tells a story of intrigue, murder, and even cultural appropriation at the hands of the government of Israel. 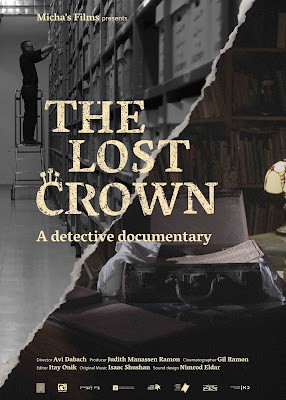 The Aleppo Codex was written on parchment in the 10th century and is the most ancient manuscript of the Hebrew Bible.  Today it is located in the Shrine of the Book at the Israel Museum, but about 200 pages of the manuscript are missing.  The manuscript was kept in the Great Synagogue of Aleppo, which was destroyed in a fire caused during the riots of 1947, following the UN vote on partition. Even though the Crown was rescued from the fire, it is still unclear what happened to the missing pages.

The filmmaker, the great grandson of the Syrian Jewish man who was the guardian of the Crown, becomes obsessed with the subject and begins to try to solve the mystery of what happened to the missing pages. He interviews Mossad agents, antiquities dealers and historical researchers. He travels to Deal, New Jersey, where he meets members of the tight-knit, vibrant Halabi (Aleppo) Jewish community, who vacation there every summer.  When he returns to Israel, to continue his unrelenting investigation, it becomes clear that we are still in the dark about what happened to these priceless pieces of manuscript.

This is both a personal quest for the filmmaker and also an attempt at righting a wrong that was enacted in the name of the State of Israel, a kind of cultural interventionism and paternalistic appropriation on the part of officials of the State.

I loved this film and I was absorbed as the filmmaker works to unravel a 20th century mystery.   You can learn more at an investigative website, which has been produced in cooperation with KAN TV, the Israeli public TV network.

The documentary film, The Lost Crown (60 minutes) is available from the producer, Judith Manassen Ramon, at Micha’s Films.  Watch for its premiere at the Sephardic Jewish Film Festival in New York City in the middle of next month.  Watch the film’s trailer!